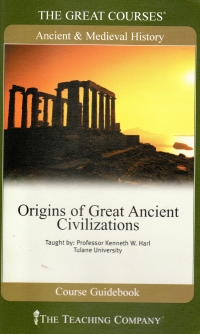 So the guidebook to this course presents me with a little dilemma: Should I count it as a book against my annual reading or not? I mean, I counted the guidebook for the course From Yao to Mao: 5000 Years of Chinese History as a book, but not the one for Elements of Jazz: From Cakewalks to Fusion. Of course, the former was over 100 pages, and the latter was like 25. The guidebook to Origins of Great Ancient Civilizations is 72 with the glossary, timeline, and bibliography. All right, you have convinced me to count it as a book read in 2019 even though I listened to the course probably over a year ago and only completed the guidebook now because I found it at one of my book accumulation points.

At any rate, this is a fascinating course, twelve lectures in all, that covers Egyptian and Mesopotamian civilizations (with a bit of a nod to early civilization in the Indus River valley, but as this last was not that well explored at the time of the course, it only gets passing recognition). The course covers the Bronze Age to the Early Iron Age, so you’ve got lectures on Sumer, Babylon, Egypt, Assyria, Israel, and the Persians as well as mention of the Hittites and Chaldeans and other tribes in those time periods who made a name for themselves.

As I mentioned in the book report on From Yao to Mao:

The fact that this succession of different groups controlling different regions could all be called “Chinese” history. You’ve got, for example, Mongols, Manchus, and various other tribes from outside the Chinese homeland taking over, succeeded by other non-Han peoples running things. But scholars continue to call it “Chinese” history. It would be like calling all of ancient Near East history Babylonian history (or Iraqi, perhaps) history–you’ve got different groups coming in and controlling the region around the ancient city of Babylon, but it’s Akkadian history or Chaldean history or whatnot. There’s not quite the enforced commonality you get in “Chinese” history. One has to wonder if that’s because in the 20th and 21st centuries, there’s a single Chinese government trying to control a large territoriy comprising different tribes’ homelands and to prevent fracturing or another tribe, so to speak, assuming power.

This sort of holds true for the Egyptians, whose civilization is controlled at various times by tribes from the Delta, tribes from up the river, and Greek peoples. The tribes that roam back and forth over Mesopotamia, though, aren’t characterized as a single civilization. I wonder why this is. The limited geography of Egypt versus the distributed loci of the other civilizations’ power? Aliens?

From the lectures and the guidebook, I come away with a vague understanding of the succession of the small empires and their chronology, and I will have something to say about the origin of the peoples in real life called Akkadians or Cimmerians when my boys are old enough to watch The Scorpion King or Conan the Barbarian.

Reviewing the guidebook makes me want to go through the lectures again, which is probably as high of praise as I can put into a brief report on the course.

Also, in retrospect, I want to count the much shorter guidebook for Elements of Jazz to my annual list. 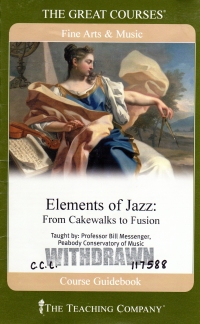 I go through phases listening to these CD courses, and I think I’ve figured out the secret. I tend to accumulate courses in subject areas with which I’m already familiar, like philosophy or literature, and they underwhelm or bore me. That, and if they’re a summary course from the 21st century, I’ll find enough to disagree with politically to not really want to finish them. But something I’m not really familiar with, such as deep dive history courses (not summary courses) or music courses, these I listen to with some zeal, and I learn a lot more from them probably because they’re completely new knowledge to me and not merely rehashing what I already know.

I really enjoyed this course for those reasons, if they are the real reasons why I get away from listening to these in the car, and because I rather like jazz music, but I’ve not really been educated in it. Until now, a bit.

The course is eight lectures. The first seven talk about a building block in the evolution of jazz, and the last has the lecturer, a known jazz pianist, improvising with some other artists to illustrate how it works. The building blocks include cakewalks, ragtime, blues, swing/big band jazz, boogie and bop/bebop, and modern jazz including free jazz, cool jazz, and fusion.

I’ve learned a heck of a lot about music, including what syncopation means (although I’ve read the word, I’ve never tied it to the actual sound), the origins of the words in jazz (jazz, ragtime, bebop, and so on). And I’ve identified the styles of jazz I prefer (swing, cool jazz, and fusion)–although I would have probably guessed these. Also, I like free jazz like I like Matisse. Which is not at all.

So I’m glad to have spent, what, six hours on this course. I wish it were longer. I wish I could play a boogie woogie bass line on the piano. I have tried because of this course. So take that as an endorsement.

Unfortunately, I have a five foot shelf of other courses which on DVD and/or fit the bill of courses that I have mentioned aren’t the ones I get the most from. So expect other entries in this series irregularly. 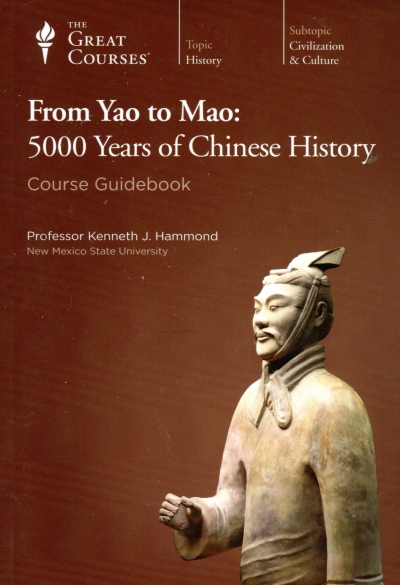 I’ve mentioned over and over that I was listening to a lecture series on Chinese history. Welp, I finished it. I also read the guidebook that came with the course, and if you’re wondering if I counted it as a book on my annual list, yes, I did. The lecture series itself was many hours in the listening, and the guide book itself is over 100 pages, so of course I did.

It’s a pretty interesting set of lectures, especially since my Chinese history was somewhat lacking. I read a couple of Wikipedia entries after watching the movie Hero, and I’ve looked at tourist books about China (like this one), but I’ve not really delved into it except where it’s intersected with Mongol history. Well, there was this book. But I’ve only dabbled in Chinese history. Not that listening to a series of lectures is much more than dabbling.

But I did get some insights and found some remarkable things. Including:

Is the lecturer pro-Communist China? Yes, but I suppose that’s either an occupational hazard or required to remain in good standing with the current government of China in case one wants to travel there for research. He calls the Long March epic and excuses a lot, including the millions dying in the Great Leap Forward, as though the bureaucratic overreporting were not a repeating motif in centralized government systems (If only Mao had known!). But Communist China is a small drop in the history of the reason, so it does not detract from the lecture series much.

So I’ll need to read more about Chinese history to cement what I heard. Also, I’ll need to read more and hear more to become more familiar with the transliteration of Chinese names and places. Listening to the lectures and reading the guide book afterward was a bit confusing as the spellings don’t match the pronunciations very well.

At any rate, worth my time, and sometimes worth going a little out of the way so I could finish a particular lecture.