In the mornings, I have a couple (or six) cups of coffee. But sometime in the mid-morning, I have decided I’ve had enough, and I switch to water. I lay up a dozen or so liters of sparkling or mineral water per week, generally Mountain Valley but Perrier if I don’t get to the southeast corner of Springfield, where Lucky’s Market looks to be the only place stocking Mountain Valley these days.

I have taken to calling the sparkling water Fizzy Bubbly with a mock Israeli accent. Because that’s how Adam Sandler says it in Don’t Mess With The Zohan.

Here, the woman who plays Sandler’s love interest offers him one.

I know, I know, it’s dubbed in German, but you can hear it named. Watch the clip now, because sometime soon the Copyright Patrols will recognize it as “protected” material even in German.

I watched the film again earlier this year because my oldest son has been on a Sandler kick, and I wasn’t sure whether this film was appropriate for young people.

Spoiler alert: Oh, but no.

But when my boys see it, sometime after they turn 21, they will recognize the source of my nickname for sparkling water.

So, sometimes, I’ll use a type of speech that I’ll just call an Elaborated Pronoun.

You know, that as a pronoun generally relates to something visible or is otherwise fresh in mind; I want that.

However, I have been known to elaborate that by adding an antecedent bad oscar.

It came out when I was talking about fixing something for one of my boys, and I referred to the it as that bad oscar.

The Urban Dictionary says bad Oscar is slang for a hot dog or cheap sandwich. That’s not where I got it, though.

Back when I was at the university, one of my closest friends lived with his mother, who was a woman kept by a fellow who had a son of his own (kind of like a very abbreviated Brady Bunch). My friend considered the young man, who as sixteen or seventeen at the time, to be his half-brother, so he hung around with us from time to time; he was even the designated driver on my 21st birthday, when we went to a bowling alley and I had a glass of Miller and a sloe gin and Seven before the moonlight bowling.

For some reason, this kid used that phrase to refer to things that were not sandwiches of any sort.

Twenty-seven years later, and I still say it from time to time. And that “kid” is over forty somewhere now. No word on whether he continues to use it.

Ever since my children were little, I’ve tried to instill in them good habits in crossing parking lots. Keep your head on a swivel, watch for the white lights in the red, and so on.

And whenever I saw a car in motion, I would say, “Be advised there are fast boomers inbound.”

Daddy was misquoting a line from Forrest Gump:

The actual line is “This is Strongarm. Be advised your fast movers are inbound at this time.”

Ah, well, if they haven’t learned by now, let them see now that their father is imperfect.

In my defense, I probably haven’t seen it in 20 years, which explains the misquoting.

When my boys boast or plan hyperbolic things, which they often do, being boys and all, I’ve often acknowledged their projected prowess or accomplishments, often set to arrive in the future, by saying they’ll be a big man on Mulberry Street.

Which, like so many things I say, comes from the Billy Joel:

You know, I didn’t like or listen to The Bridge that much, but this song stuck with me.

And probably influences the way I live more than I would like to admit.

At any rate, WSIE, ostensibly a jazz station, played this song yesterday, which made me think of it.

This would be a case of what Daddy always says, except my boys are past calling me Daddy, and this particular utterance only occurs in the very specific circumstance when someone asks Dad (as he is now known) what time it is at 4:30.

Because of a relatively minor hit for the Spin Doctors some 26 years ago, old man.

I don’t remember that it was a hit at the time, but Wikipedia says it went to #26 on the charts.

So. My oldest son is twelve, and he’s starting to notice girls, although he will downplay this, but when he’s noticed them, his body language changes to an enforced nonchalance, and he sweeps back his forelock often and with flourish. He did this when putting his contact information into the phone of the Norwegian exchange student last week. He did it when the young cashier at the grocery recognized the band on his shirt.

So yesterday, when both of my boys were engaged with girls of their age at the martial arts school after their classes were over, I reported to my wife,

They both were mackin’ on girls.

Which might just catch on at their small school as the proper slang.

Why on earth would I use that natively for flirt?

Well, remember, gentle reader, I grew up in the projects in the 1970s, when many of the residents wore picks in their afros kind like Questlove does. 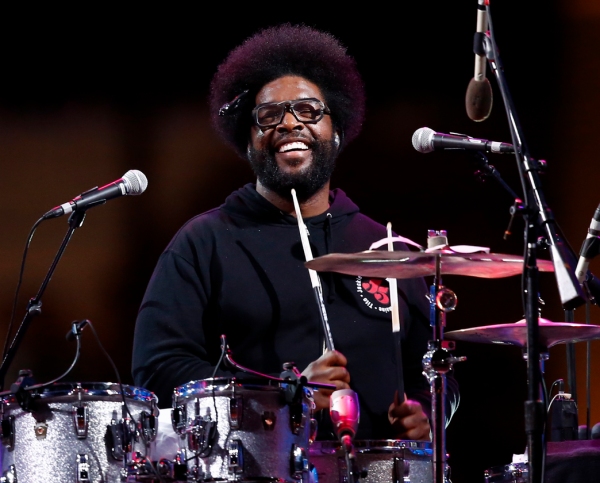 But they were earnest and not retro.

Did I try to wear a pick in my hair like my friends did. Yes. It went as well as you might expect, but certainly better than it would today, where my pate is as close to shaven as I can get.

So it’s a product of my youth.

Or perhaps I use it because I listen to a lot of Willie Hutch.

Which I like to say is because I spent a lot of time in my youth in the housing projects, where many of the young men walked around with the new portable tape players on their shoulders, playing music just like that. Presumably, while preparing to mack on girls.

Still, I keep using out-of-date slang with my children in hopes that they’ll pick it up and suddenly the whole school will be talking like me.

But it has not happened yet.

When it was time for the children to pick up, their preschool teachers would sing:

I think it might be akin to the Lutheran Common Table Prayer, because I heard another pastor sing it to encourage the visit-end toy pick up.

Here at Nogglestead, we had another little ditty for the same purpose:

Today, we heard the source material on the radio, and the now-eleven year old smiled a bit when he remembered the aforementioned pick up song.

I’ve laid these little touches in their memories like pleasant little Easter eggs for them to remember suddenly sometimes.

Apparently, for years (dare I say decades?) when my beautiful wife and I discussed paying bills, I’ve occasionally referred to it as “gotta get those fees to the agencies.”

So I loaded up a bunch of music on a mobile device for our recent trip to Wisconsin, and amidst the greatest hits of Billy Joel, the song “The Entertainer” appears:

We’ve got about a hundred feet before the driveway where we’re going to turn, and a bicyclist is ahead of us, going bicycle speeds. So I say, “Faster, Pussycat, Kill, Kill!” as I often do when encouraging some part of traffic to accelerate

Strangely enough, I don’t say that because I’m a fan of the film of that name. I think Assault of the Killer Bimbos handled the same themes more effectively.

You should know me better: I am a fan of the band named after the movie (but incompletely), Faster Pussycat.

I did something for a client recently where I isolated a bug that had afflicted them and caused them some grief and loss of face with their client, and I called myself Hero of the Beach.

That comes, of course, from the old Charles Atlas ad:

Comic book readers of a certain age would understand why becoming the Hero of the Beach would be the best thing ever.

I must have seen a bit of it on Univision once in the early 1990s.

Well, all gigante things must come to an end:

Sábado Gigante, the quirky, iconic, 53-year-old variety show that has been a fixture for generations of U.S. Hispanics, will broadcast for the last time on Saturday night. As they prepared to say farewell, Sábado’s beloved host, Don Francisco, and his followers looked back on their time together with nostalgia and emotion.

“I started doing this when I was 22 years old, and since then, my whole adult life has transpired,” Mario Kreutzberger (Don Francisco’s real name), told El Nuevo Herald shortly before a taping for Saturday’s show. Kreutzberger, 74, married, raised three children (including a son named Francisco) and had nine grandchildren.

It’s not as though I’ll stop saying it, but there’s no chance my children will catch it while flipping through cable in college and think of me.

Whenever we go to the hardware store, I tell the boys, in my best Jack Nicholson impression, “Ace is the place with the helpful hardware, man.”

Why do I inflict this upon my children?

combines with an old television commercial for a Milwaukee radio station that had a Jack Nicholson impersonator say, “Like, fa la la la la, man.”

So I did a mashup of two obscure things my children will probably never experience. And I do it over and over again upon those poor fellows.

One would think over the years that my Jack Nicholson impression would improve. But one would be wrong.

The source is not classic children’s literature, but rather classic arrested adolescent literature. Namely, another beer commercial that was popular around the turn of the century, back when I was watching hockey games on television every couple of nights:

Springfield has a new Denny’s, and it was inevitable that we would venture to the restaurant, the first of its kind in the city, because I spent an awful lot of late night time in my youth in a Denny’s, and I longed for a Super Bird and a bowl of vegetable beef soup.

Still, my children could not understand why I kept calling it Lenny’s.

Gather round, youngsters, and let me explain about the Corlick sisters.

In the late 1980s and early 1990s, Denny’s advertised on television (perhaps they still do, but we’ve been out of Denny’s television markets for five years now). The commercials featured two sisters, the Corlick sisters. One of them mishears what her sister says to comedic effect (much like Daddy does on occasion, although he’s the only one who thinks it’s funny). Then she mentions eating at “Lenny’s”, and her sister automatically corrects her to “Denny’s.”

I had a few of those free meals at Lenny’s. I recall one year visiting multiple Denny’s so that I could get the free meals. As a young man, I could eat a lot.

So my children know about the Corlick sisters. I would have alluded to the commercials when interacting with the wait staff, but everyone working there was younger than the commercials.

When we’re driving and I see a jogger, I often say, “There’s a jogger. I wonder if his/her name is Jaromir.”

That’s based on a mispronunciation of Jaromír Jágr, a player in the National Hockey League ten years ago when my beautiful wife and I watched a lot of hockey.

And he’s back. He’s going to turn 41 next month, and he’s playing center for the Dallas Stars this season.

Given that the oldest boy is starting to pay attention to hockey and very well might see the Dallas Stars in action, he will not only remember that thing that Daddy always says, but he might have first hand knowledge of watching the player who inspired it.