When dusting my tchotchkes, I use the Thetis method.

That is, when I pick them up to dust them, I clean every part of them except where my fingers hold the tchotchkes.

(Footnote for the classically themed gag.)

I’m looking to get financing for my new real estate project, a set of apartment buildings with small units for young men just starting out.
I’m gonna call them “The Dude Abodes.”

Except maybe in New Mexico, where they’d be “The Dude Adobes.”

I say “two-fer” because the first was the original post, and I immediately commented with the second.

On a long enough timeline, I imagine I will start repeating my best puns of the day. I’m going to have to start searching the blog to make sure I’m not repeating. So far, so good on these quips.

In the comments, Gimlet says it took him a minute to get the joke. Ten years on, it took me a minute to re-get it, too.

That would have been before my school sports dad days. Now that my boys are both in high school, it’s strictly band dad. Although I do go to the high school football games where they march.

One does not have to go all The Da Vinci Code or National Treasure to find clues that will lead to some treasure. I have discovered some sort of conspiracy or puzzle in popular music across the generations.

So a recent (2019) song from Four80East, “Cinco Cinco Seis” has played a bunch on WSIE and DirecTV’s smooth jazz station many, many times:

In it, they repeat like an electro-jazz numbers station, “Uno dos tres quatro cinco cinco seis.”

Yesterday, on the radio, I heard “Pretty Fly (For a White Guy)”, the 1998 hit from The Offspring, and it, too, says that number:

1-2-3-4-5-5-6. What does it mean? Some people might say it’s counting to get the beat before starting music, but the music has already started.

It’s coordinates. Or something.

Does the number 480 and the direction East mean anything?

According to the official account (if you can believe the “official” story), this made up bit of German-sounding language was, again, designed to be the count for the music to begin–in this case, the music does begin after the words.

But are the words a pass phrase? An indicator that one must start at some point in Germany (a rock?) and go east 480…. something? Is 1234556 the password, proving that the people who have hidden vast treasure in Germany or Eastern Europe were as bad at passwords as people on the Internet?

If anyone needs me, I will be in a room in the basement, posting photos and text and drawing arrows between them until I solve this mystery.

Although it’s not explicitly stated, apparently robotic exoskeletons are not allowed in martial arts sparring, either.

Which is unfortunate, as Asian tech-arms dealers have notoriously restrictive return policies.

Jeez, I have been studying martial arts for a long time, but not frequently enough to master them.

If you cannot read an item on your to-do list, you can just strike it off.

Follow me for more time-saving tips, including a special grocery list hack that can save you money at the grocery store!

Brian J. Noggle wargamed, using MegaBloks, Happy Meal toys, and various wheeled toys, a regional conflict in the Middle East that erupted when Israel stopped an “aid convoy” including Iranian naval vessels. It wasn’t going too bad for Israel until Russia, depicted by a talking Shrek riding on a cast iron tractor, offered direct military aid to Iran to further encircle Afghanistan with its military forces.

I am pretty sure I still have all the action figures and Happy Meal toys, but not the MegaBloks, in unsorted boxes in the garage. I should get them out and get to my predicting, as I could probably do no worse than the powers that pretend in Washington, D.C.

Brian J. Noggle sees the light at the end of the tunnel. But Tangina said not to go into the light.

Mike commented: “All are welcome, all are welcome. there is peace and safety, in the light.” Before he unfriended me, before he died.

I’ve just learned to play a miskatonic scale on my guitar.

Now, what am I to do with all these chthonians I’ve drawn from below?

Yeah, I have not picked up that guitar in a while. I learned a few chords, but I was not very good at changing cords in time as I still had to look at the frets to place my fingers.

From a dream I had last night:

HOW TO MAKE THE MAN IN THE SUIT UNCOMFORTABLE IN THE RESTROOM: Narrate your urination.

I said this in my best George Carlin imitation in my dream. I was in a school bathroom. A repairman was working on the urinals, so I stepped into one of the stalls, and as I was doing so, a man in a suit came in. So I said this from the stall. And I noticed as I was starting to urinate that there were books in the toilet. So I stopped, and I took the books out of the toilet, and eventually there were 43. I mentioned it to some teachers, presumably after zipping up, but transitions are a little smoother in dreams, and they said it was one student’s book order, and sometimes the kids are afraid of books.

I don’t it’s based off of yesterday’s post or I just had to go to the bathroom (I awakened, and did).

But, c’mon, you can hear that in George Carlin’s delivery, can’t you?

Maybe I should include a TMI category on the blog.

Brian J. Noggle got his baby a walker, and he destroyed the neighborhood. In retrospect, it should not have been an Imperial walker.

Now his former baby, albeit the elder, is learning to drive, so he’ll soon be able to go to Tosche Station with his friends.

If you can say the name of this flavor without using Tone Lōc’s diction, you’re a better man than I am, Charlie Brown. 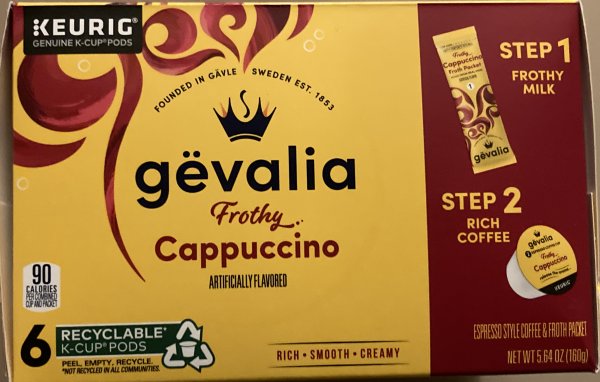 Here, let me help stick it in your head.

There. Now you won’t. Although whether you ever see Gevalia Frothy Cappuccino in the wild is chancy at best.

Brian J. Noggle is so unsophisticated, he thinks cognac is a really big bear.

How is it that I know that song?

My mother must have had it on a record at some point.

Which means I probably now own it on a record somewhere. 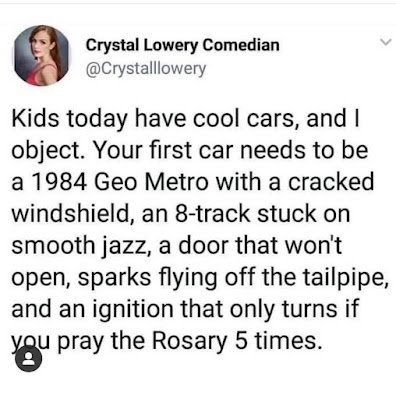 And I had to correct the Internet, again.

Sorry, I think we wandered a bit from correcting the Internet into personal reminiscences. But that is the way of the blog, ainna?

Apparently, I was on fire on May 2 in years past.

Brian J. Noggle banged the wrong gong and brought it on instead.

Brian J. Noggle thinks Les Miserables would have been a different story entirely if the protagonist was Jean-Claude Vanjean.

Brian J. Noggle is so vain, he thinks this song is about him and is sending him coded messages from The Messiah Team detailing the secret conspiracy of grocery store bread vendors against him. So maybe “vain” isn’t the operative word.

Facebook, and Twitter, used to be good for a quip, before the algorithms got too sophisticated and stopped showing them to people I know.

As a reminder, gentle reader, I read Kafka’s complete works in 2006 and was mostly unimpressed.

Lethal Weapon 2 is an Easter movie.

Now, it is not set during the Easter season that I can tell; however, review the following:’

You see: It was The Passion of the Christ before Gibson had enough clout to make the movie he really wanted to make.

Follow me for more insight into how the Lethal Weapon movies all deal with important events on the church calendar, and how Bird on a Wire is a documentary.