Apparently, I haven’t done one of these posts in three years. I’d like you to believe, gentle reader, that my desk has been impeccably clutter-free in that interim, so I will not dispel your notion should you have it. Although, I am pleased to say, none of these items has been on the desk for three years, some have certainly been on my desk for too long.

The Thank You Card 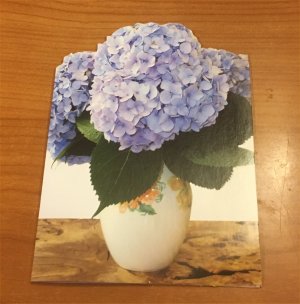 My oldest son had his birthday at the beginning of the summer, and my beloved aunt sends him a gift card every year. Every year (well, and at Christmas, too, so it’s more than once a year, but only once for the birthday) I have him write a thank you card to her. Sometimes it’s delayed a little while so he can say what he spent the money on, but this year, he spent it quickly on a Nerf gun. But it took a couple weeks (a month’s worth) to get him to write the card. And then he gave it to me to mail, and I generally include a little card of my own with it. But as I have not yet written that note, the thank you card languishes. 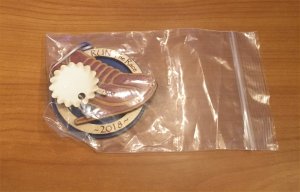 Gentle reader, this is not a true Christmas straggler (that is, a Christmas decoration in some nook or cranny that is not boxed when the Christmas decorations come down). The school my children attend has an annual fundraiser with ornaments depicting the theme of the school year, and I buy extras to give as Christmas gifts. This one was an extra.

I don’t remember exactly to whom I gave them last year, so I’m not sure what to do with this one. Perhaps, as we’re now a two tree family, we can put one from 2018 on each. 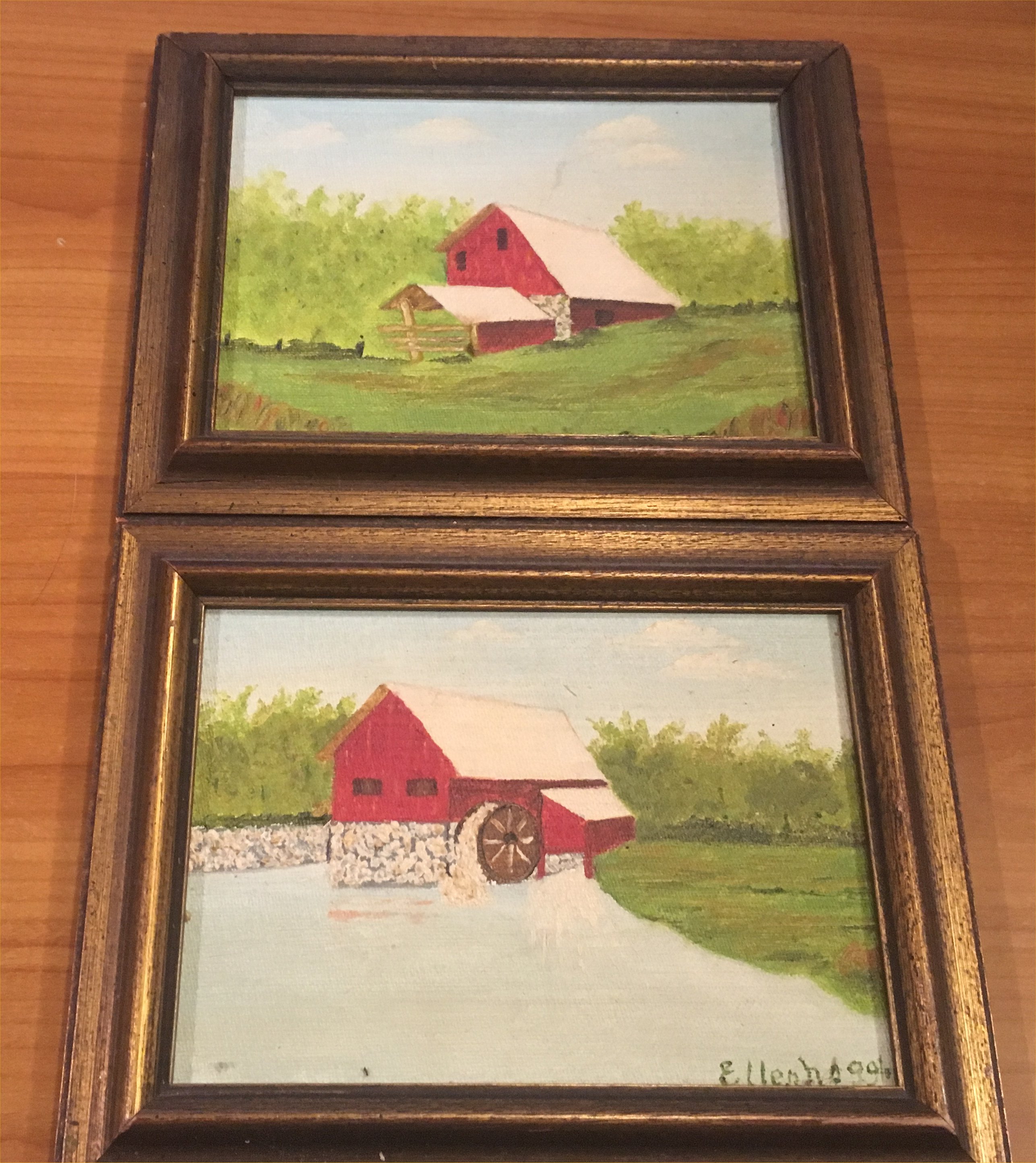 My great-grandmother executed these paintings maybe, what, fifty years ago? They were on the wall of our house in the projects–so after the divorce, apparently my sainted mother got custody of them as well.

Here at Nogglestead, we had them on the wall in the dining room until a woodburned chicken keyhanger replaced them because suddenly my beautiful wife likes chicken decorations in the kitchen and dining room. They went unboxed into the garage, on my workbenches (which have more than five things on them, I kid you not). When cleaning the garage, I brought them into the office here until I can determine a good place to hang them. They’re not big pictures, but the walls here are very full already and getting fullerer.

I bought these LED light bars out of a catalog over 10 years ago before they became common enough to find in department stores. I wanted them for indirect light atop bookshelves, and they did that at our house in Old Trees and here at Nogglestead for a while. Well, they sort of did. I set them atop the bookshelves but never actually turned them on.

So a year or so back, I had to clear some space atop the main den’s bookshelves for audio courses. I brought these into my office, and they’ve sat on the far edge of my desk where I put things that I should put away somewhere other than my desk. They’ve been there except for the times when I have moved things I should pick up and put elsewhere to the floor. This last strategy does not work, as I then might put some of the things away but generally pick up the floor by putting them on my desk.

I’m not entirely sure where I would put them, which probably means I should just put them into the donation box in the garage.

The Pen I Thought Was Cool When I Was Ten

Man, when I was in elementary school, the four-color ballpoint pen was the greatest thing. You could write in one of four different colors. All the cool kids had them.

So, of course, I did not. I got my first Trapper Keeper from a trash can in the projects (and my first bike came from a dumpster), so technology this advanced was way out of my experience.

Now, some forty years later, The Heritage Foundation has sent me one along with a fundraising pitch, and I cannot think of a single thing I want to write in green.

This shall probably be the first thing to leave my desk as I give it to one of my boys who will likely find it as cool as I would have.

Now that I have mentioned these things, perhaps I will be inspired enough to remove them from my desk.

I’ve cut my office hours, so my desk is starting to clutter again. Back when I was handling the children full time, I didn’t have a lot of time in my office(s), so I’d drop things onto the wings of the big corner desk I have, and the piles would get several inches high. When I had a full time contract a couple years back, the desk was pretty tidy. But the desk is starting to accumulate things on the margins, out of peripheral vision when I’m looking at my peripherals. So to shame myself I am pointing out some of them.

I could go with a list of five (or more) things I’ve already blogged about, including tickets and the playbill for Black Comedy, an Ideals, a couple copies of Battlestar Galactica and a drawing I got in Saint Charles, and even an Afghani currency I previously posted about in a Five Things on My Desk post from 2012 (although instead of a Trinidad and Tobago dollar, it’s partnered with a Somali bill that I don’t know where I got).

So here are five things currently on my desk:

Sadly, that only scratches the surface. But you can’t write much about a clean desk.

So the older child announces fifteen minutes before we leave for school that he has show and tell, and he needs something that begins with M. Although only six, the boy immediately comes up with “Money!” because he hopes that either I’ll give him some American money, and he will get to keep it, or that I’ll let him take some out of his piggy bank, and he’ll get to spend it.

Fortunately, my desk is a veritable Hammerspace (the term I discovered when trying to remember the source of the phrase Trenchcoat Schtick which I remembered from a single gaming session at Gencon in the late 1990s–apparently, I was playing a demo session of Tales from the Floating Vagabond).

As such, I was able to immediately lay my hands on a couple pieces of money for him to show and tell: 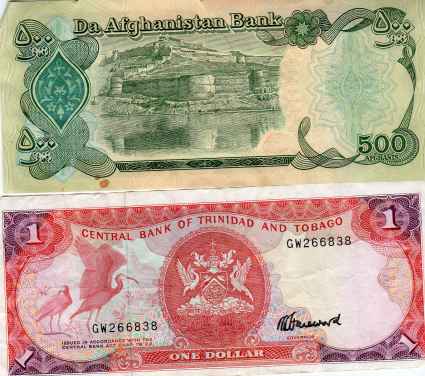 The top is a 500 Afghanis note, and the bottom is a single Trinidad and Tobago dollar.

Where did I get these? They were on my desk.

Seriously, though, I don’t know where I got them. I used to have a little sack of foreign money that I’d acquired from traveling relatives and whatnot, but I sold that sometime in college or immediately post-college to raise some capital to invest in driving my little car to the Central West End for some coffee or some such. These new bills I have acquired sometime in the last two decades then.

They got onto my desk because they’d resided in the drawer of my office’s second desk, and I had recently (within the last six months) scoured those drawers for something else and came up with the bills, which I’d hoped to put into a more displayable form or something.

But now they’ve been to school and back to save the day, and they’re back on the desk in the sea of rubble which includes a single card from The Worst Case Scenario Game, an extraneous copy of Robert B. Parker’s Rough Weather (which I find a lot at yard sales and think I’ll fill out my collection with the books I’ve read from the library, only to discover it’s always Rough Weather for sale at garage sales), empty coin folders for Lincoln Cents 1959 to Present and Jefferson Nickels from 1962 to Present, and a copy of Dallas: The Television Role Playing Game.

My desk is, indeed, a wonderland.

I’ve been cleaning my office again, which means I’ve been dumping things on my desk. Actually, I don’t know what I’ve emptied onto my desk. Apparently, some bin of mementos, because I cleaned some old files off of my desk and found a number of things in the strata below, which includes:

My desk is relatively clean these days, as I’m trying to keep ahead of things, but I do still have some strange things on my desk lingering from aeons past. To whit:

By naming these things on the blog, I do tend to handle them in short order, which is why I’m bothering you with them.

(Previously on my desk.)

An unsorted list that describes, really, why I need to clean off my desk:

These things were deposited by me onto this desk months ago because I need to take a couple minutes to clean them or whatnot. Instead of doing that, I’ve posted on my blog, and soon enough a blizzard of paper to file and act upon will cover them again until the springtime.