A week or so back, a Facebook friend, well, a 1980s BBS friend who I met once or twice thirty years ago, posted that he’d be at the St. Louis Comic Con in St. Charles, Missouri, this past weekend. A light bulb went off over my head: I could take my kids up there for the day and then come back for a quick treat that they’d remember for the rest of their lives. Also, the oldest from time to time draws little superhero things and announces he’d like to make comic books. How great would it be if I could introduce him to an actual comic artist in an actual comic book convention? It was the day before Father’s Day, and like a rotten kid being good the last week before Christmas, I needed to build up some good will if I was going to get a good gift.

So we lit out to the Saint Louis area on Friday morning. I didn’t tell them where we were going, instead letting them believe they were going to the normal summer camp thing. The younger was in the front seat, so he noticed right away. They were very excited about the prospect, although I’m not sure whether it was going to St. Louis or that they got to play on the Game Boy Advances we save for long car trips.

I’d brought a couple of things to read, but nothing I wanted to read, so I watched the St. Louis Cardinals Game while the boys watched cartoons.

Oh, yeah, and on Saturday, we went to the comic book convention. 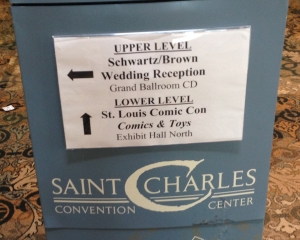 This was my first comic book convention, oddly enough.

I understand that some other comic cons have sessions and panels and presentations, but this one looked to be more like a comic book flea market, nothing but tables with comics and collectibles and a number of comic artists (like my friend) with a table of their works. I think the con welcomed a professional cosplayer, but I think she was at a table in civilian clothing signing pictures of her in cosplay costumes.

There were some cosplayers, but we got their very early (at the opening time), so we didn’t see a bunch. Several Harley Quinns, of course, including one that looked to be a six foot husky male Harley Quinn. Undoubtedly from one of the alternate DC earths. There was a He-Man, a couple women in military uniforms, Captain America, and a Poison Ivy that I saw. Waldo and some kid in a dinosaur or Pokemon costume. I’d hoped the boys would see someone from Mortal Kombat since they’ve started playing that on the Super Nintendo, but no such luck. Also, they refused to take a picture with Harley Quinn, which is the only reason this is not a Rule 5 post. Sorry, guys.

I led them through most of the tables before we got to my friend the comic artist. He recognized me straight off, which was odd since I hadn’t seen him in a long time. It must be the fedora. We chatted for a while, but by that time, my children were squirrelly and unimpressed by their father knowing a comic book artist. So I bought enough material to cover half of his table fee, and he threw in a small drawing of his comic character Frik dressed in cosplay: 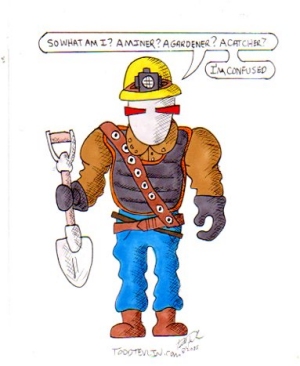 At any rate, to make a short story long, it was the first of my travels solo with the children, and they did not completely drive me nuts. Although the combination of cartoons, comics, and sugar made them a bit squirrelly at times. So we’ll probably take similar trips in the future.

As far as comic cons go, though, I prefer gaming conventions or Renaissance festivals. I accumulate comics more than collect them. For example, when I said the boys could get a couple of the two-for-a-dollar comics at one table, the youngest took so long in making his selections that I found issues 2-22 of the 1980s Marvel Battlestar Galactica title that I bought more comics for me than for them. But I prefer the theatrics of the Renaissance festival or the participation aspect of gaming to simply wandering around looking at stuff for sale.

Hopefully, I made a memory for my children, but although I try to set the framework of awesome adventures for them, it’s entirely possible that the thing they will remember most is playing checkers at the Cracker Barrel while my aunt and I talked. But that’s okay, too. Because I’ll remember more of it, particularly with the external aid of this blog post.

Although I wish I had more pictures of my nine-year-old and eight-year-old at the con, Harley Quinn or not.

2 thoughts on “The Road to Saint Charles”