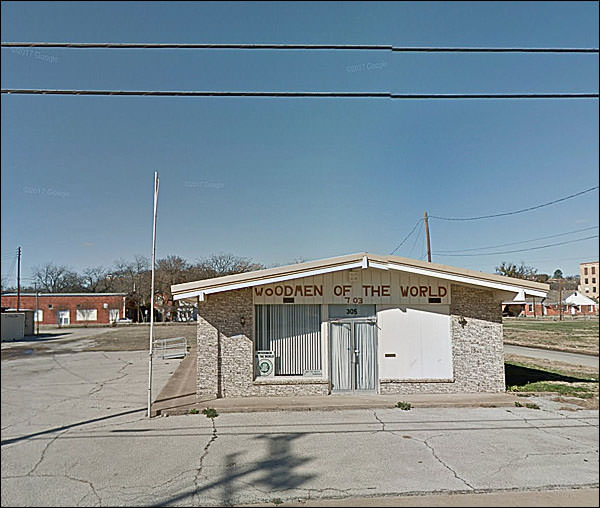 As you might remember, gentle reader, I inherited a box of my grandfather’s old books when my aunt passed away a little over a year ago. They have remained in the box as they include a fourteen volume (plus index) set of The Classics in Greek and Latin from 1909 that I really don’t have shelf space for as a unit. Although I did get the books that I stacked on it during the great ABC Books ordering frenzies during the lockdown of Spring 2020 moved up into the shelves, the box has remained on my office floor the whole thirteen months. And I’ve had to move it around to keep it from the background of video computer calls during that period. The number of which has been increasing as I’ve been interviewing for other work and presumably will continue once I accept an offer since everybody does video calls now.

I recently ordered a small roll of clear book-covering to put over the covers of some of my older works, especially the ones I hope to read some day–I recently covered a nineteenth century collection of poetry with an old paper bag the way we did old text books back in the days when public school kids learnt something instead of playing computer games all day on suddenly imperative expensive school budget line items (get offa my lawn).

So I cracked open this box and contemplated covering these books first and making room for them somewhere on the read shelves, when I discovered that the box also included a 1915 edition of The Official Ritual of the Modern Woodmen: 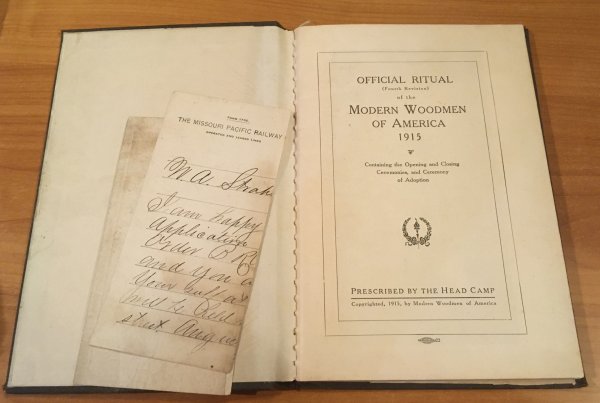 I don’t think my grandfather was a Woodman; the book itself contains a note indicating the acceptance of the presumed previous (to my grandfather) into the organization into 1891–given this is in a 1915 edition of the ritual, the fellow must have been in it for a couple of decades at least.

Wait a minute–upon further review, the name on the note is a family name, so this came from a relative somewhere along the line, but not my grandfather’s side. So I inherited this book from my grandmother through my aunt.

But, yeah, life intersects with Lileks. 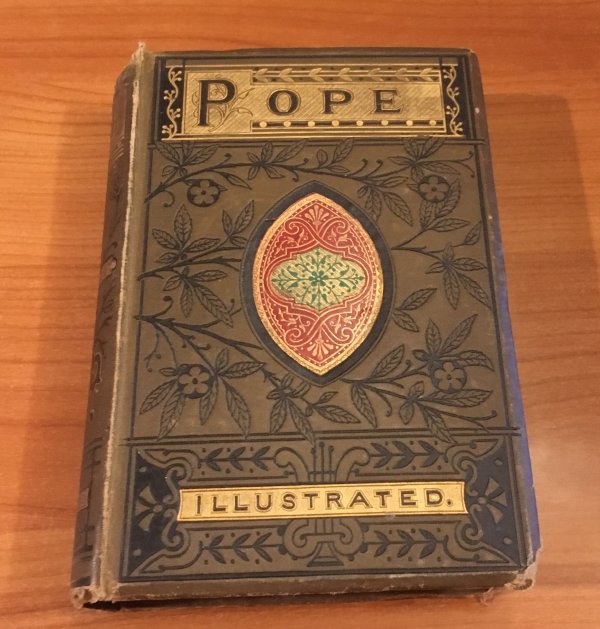 This, although smaller, will go nicely with the Longfellow and Tennyson. I have a couple of reading copies of Pope, some younger only by about 20 years but in better shape for reading, so I will likely shelve it before or after covering it.

I kind of hedged my bets. I ordered 10 yards of covering material from Amazon, where apparently sellers there take an industrial roll of Brodart wrapping and cut it into smaller pieces to sell at a lower price than a whole roll–but the sum of the cut pieces will add up to more than the whole roll, natch. But I’m not sure that 10 yards will cover all the Greek and Latin classics–there are fourteen in all, and I have not done this before, so maybe a yard per book is not so outside my skill level (that is, incompetence).

Maybe I should bit the bullet and buy one or more of the $150 rolls and a roll dispenser or two if I’m going to do this seriously on my collection or just the better bits of it.

More likely, though, I will attempt to cover the Pope and maybe the Woodsmen book and leave the box on my office floor for another year or two and the remainder of the roll on my desk for almost as long. After all, although my life sometimes intersects with Lileks’s Bleats, my habits more often intersect with Andy Rooney’s.

You know, once upon a time, I was going to have a blog dedicated completely to found bookmarks, the things I have found in books that marked previous reader’s places in books they apparently never completed. Of course, once I got the notion and started writing rather long-form posts researching the things, I stopped finding interesting things in books. At some point, I think I imported the posts from that blog into this one, and the Found Bookmarks category here before today only numbered three items. Hard to make a living as a blogger with a bunch of obscure blogs when you can’t frequently update them.

I seem to go through spurts of it; I read a lot of books that do not have someone else’s place markers in them, and then suddenly I have stuff falling out of all sorts of books. The type of book I read probably determines this a bit–I don’t find a lot of found bookmarks in Executioner or short paperbacks, art monographs, collections of poetry, or nice editions of Great Literature. Readers probably finish genre fiction, and they either don’t pick up the others to read or finish them. Some books, like nonfiction, probably get abandoned more than others. The source of the book probably also matters: I think the Friends of the Springfield-Greene County Library goes through the books for personal effects before they mark them, and book stores might, too, so my best source for found bookmarks is probably garage sales and maybe church or more amateur book sales–neither of which I have been haunting recently.

But I recently picked up Abridged Treasury of Prayers, a collection of prayers published by Concordia Publishing House in St. Louis. I knew it had some things tucked in the front cover (meaning what I found was not, technically, a bookmark). To be honest, I am not sure where I got the book–I thought I inherited it, but maybe not.

What I found WILL SHOCK YOU! CLICK HERE FOR MORE: END_OF_DOCUMENT_TOKEN_TO_BE_REPLACED

So, within Vancouver: A Year in Motion, I found a flier for a restaurant. A restaurant in Vancouver would have made sense.

But this restaurant, Brogans, is in Ennis, Ireland. 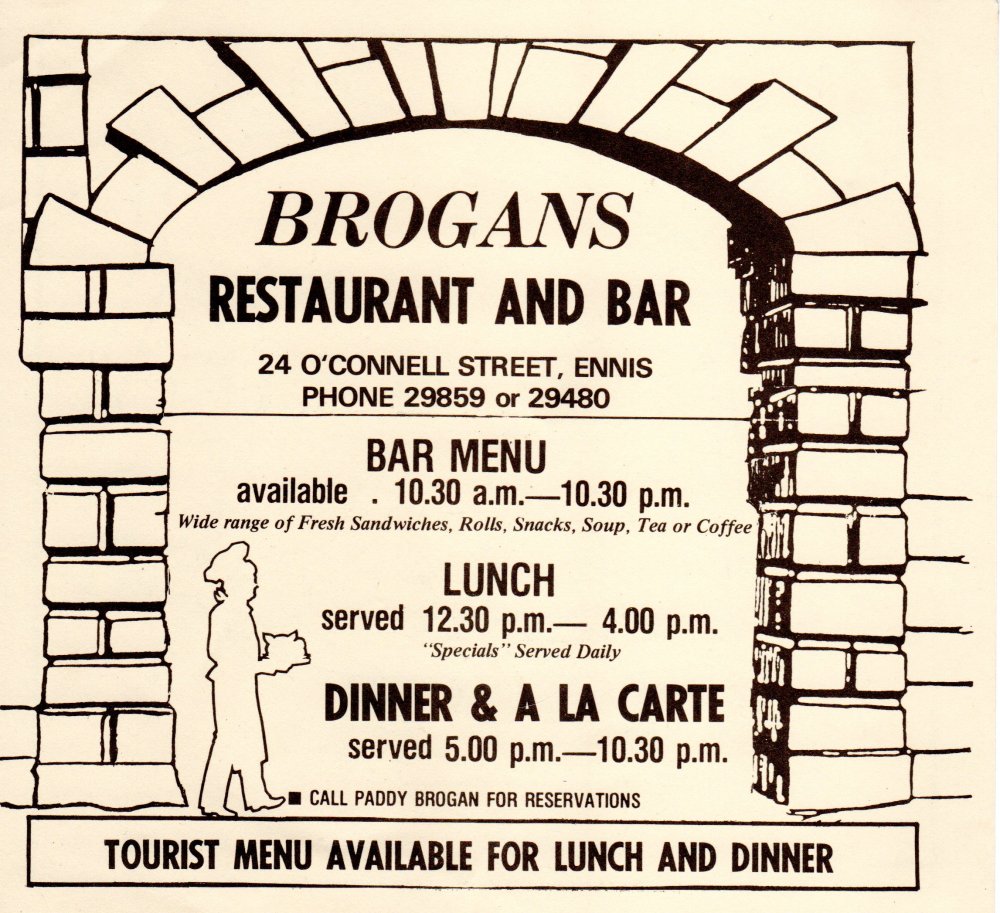 The restaurant is only only 35 years old, which is about the age of the book, and the traveler could have picked it up and put it into the book at any point since then, but I suspect it would likely have been in the 1980s. The flier is on brown card stock and looks like something that would have been pasted together by hand and not by computer.

So, likely, whomever would have put this flier in the book visited both Vancouver and Ireland in relatively short order. I would be envious except I’m generally reluctant to travel, and I have visited Poplar Bluff, Missouri, St. Charles, Missouri, and Washington, D.C., in the last couple of months, so I seem to be easing into a little travel anyway. Also, envy is for the small minded.

So what do I do with this now that I’ve read the book and scanned the flier for posterity? Shred the flier and use it as kindling for a fire in the Nogglestead fireplace? Tuck it back in the book now atop the shelves at Nogglestead? Or simply let it float around on the jetsam on my desk for a year or two so that it appears on a Five Things On My Desk post in a couple of years (after all, I’ve already scanned it, so that will make it easier for that latter-day post)?

Probably the latter followed by one of the former when I get around to it. 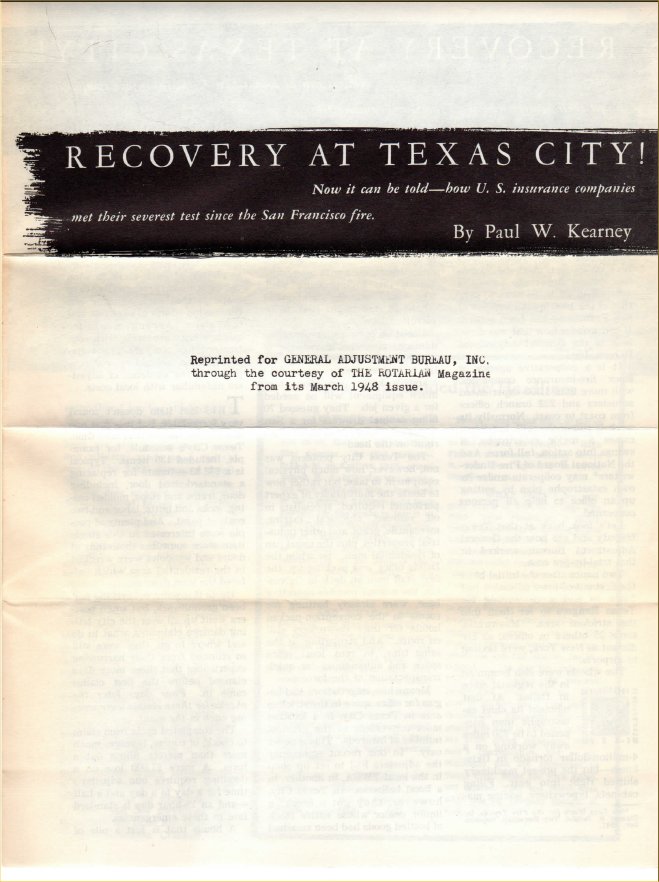 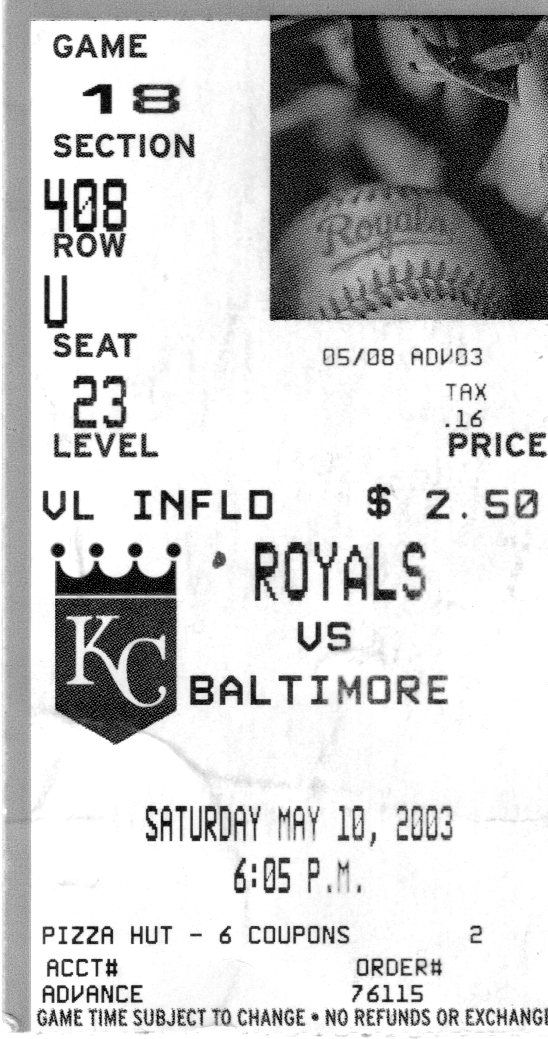