Oh, right, like I’m the only one who sometimes tries to enumerate the Four Musketeers from memory and suddenly lapse into Greek Fates.

Brenda Lee’s “All Alone Am I”

when I sing them in the voice of Gollum.

How much coffee have I had this morning? Not enough.

Back in the late 1990s, I volunteered with a local theatre company whose productions were in a Methodist church in the city of St. Louis. The church itself was a sprawling, multi-story castle that had a kitchen, a couple of chapels, a gymnasium, offices, strangely spaced bathrooms, and vast storage spaces. There were often a couple of different groups having functions there, so it was not uncommon to run into strangers in the kitchen washing dishes or something. And the minister mentioned that he’d had a problem with homeless people unlocking doors while the front door was open so they could come in and sleep there.

So I got to thinking about a novel about a young man in the mid-twenties crisis who meets a man who has, unknown the the church, moved into just such a church and lives on the premises gratis through some trickery and even receives some mail under the name John Methodis. I was going to title it The Gospel of John Methodis and study how this older fellow went off the grid and why that appealed to the boy in transition from the immediate post-collegescence to growing up–or not.

I didn’t get too far into writing that because it seems a bit thin of a plot to hang a whole novel on and the incidents within the book never materialized or connected themselves. Also, I’m lazy and have managed only two novels out of a couple dozen novel ideas.

Somewhere I must have read the story of Chheng Guan Lim, who for several years in the 1950s did just that.

The world is far crazier than my imagination.

The United States Postal Service certainly is diversifying its revenue stream. For starters, it’s turning to a line of clothing to help close the revenue shortfall caused by the decline of first class mail.

But it’s also looking to stick its hypostome into the recently unpersoned Lance Armstrong:

The United States accused cyclist Lance Armstrong on Friday of defrauding the U.S. Postal Service by taking its sponsorship money at the same time he was doping and using performance-enhancing drugs in violation of cycling rules.

The government joined a civil suit against Armstrong, stripped of his seven Tour de France titles and banned for life from cycling in 2012 after accusations he had cheated for years. In January, he said the accusations were true in an interview with television host Oprah Winfrey.

They got positive publicity when Lance Armstrong was a hero, and nobody thought ill of the post office for Lance’s recent fall from grace.

Until, of course, it decided to join this suit, where it revealed that the money-losing enterprise has $30 million or more to spend on sports sponsorships, and that it’s not above spending more of its lost money on a speculative lawsuit.

Instapundit linked to a piece by Megan McArdle about America’s New Mandarins, wherein she talks about the people drawn into government and chattering class employment and their strengths and weaknesses:

All elites are good at rationalizing their elite-ness, whether it’s meritocracy or “the divine right of kings”. The problem is the mandarin elite has some good arguments. They really are very bright and hard-working. It’s just that they’re also prone to be conformist, risk averse, obedient, and good at echoing the opinions of authority, because that is what this sort of examination system selects for.

The even greater danger is that they become more and more removed from the people they are supposed to serve. Since I moved to Washington, I have had series of extraordinary conversations with Washington journalists and policy analysts, in which I remark upon some perfectly ordinary facet of working class, or even business class life, only to have this revelation met with amazement. I once had it suggested to me by a wonk of my acquaintance that I should write an article about how working class places I’ve worked usually had one or two verbally lightning-fast guys who I envied for their ability to generate an endless series of novel and hilarious one liners to pass the time. I said I’d take it under advisement, but what on earth would one title such an article? . . .

But many of the mandarins have never worked for a business at all, except for a think tank, the government, a media organization, or a school–places that more or less deliberately shield their content producers from the money side of things. There is nothing wrong with any of these places, but culturally and operationally they’re very different from pretty much any other sort of institution.

I have seen this a little in the tech sector, too, where suburban kids who liked computers went to school for computers and then emerged on the other side of college as highly paid engineers who lived pretty good livings with somewhat skewed understandings of how things worked. In a lot of cases, our politics diverged quite a bit, too. I can’t help but postulate that moving in the insular world of technology, where things can just be done because you will them to exist through programming and where the government doesn’t put its thumb quite down on your livelihood (yet), might help envelop and cocoon people, too.

Hey, speaking of my diverse employment background, check out this ten-year-old essay I’ve uncovered for you, gentle reader: Lessons from a Grocery Store. Also, don’t miss my currently running series Management Lessons From My Bad Bosses.

So I pulled into the car wash to get the road treatment rinsed from my vehicle (this winter in Springfield has been about 2″ of snow and 6″ of road treatments to melt the snow before the sun did, which it failed to do).

And as I’m rolling and before the door behind me closes completely, I see a bird fly in. And they perch on the equipment: 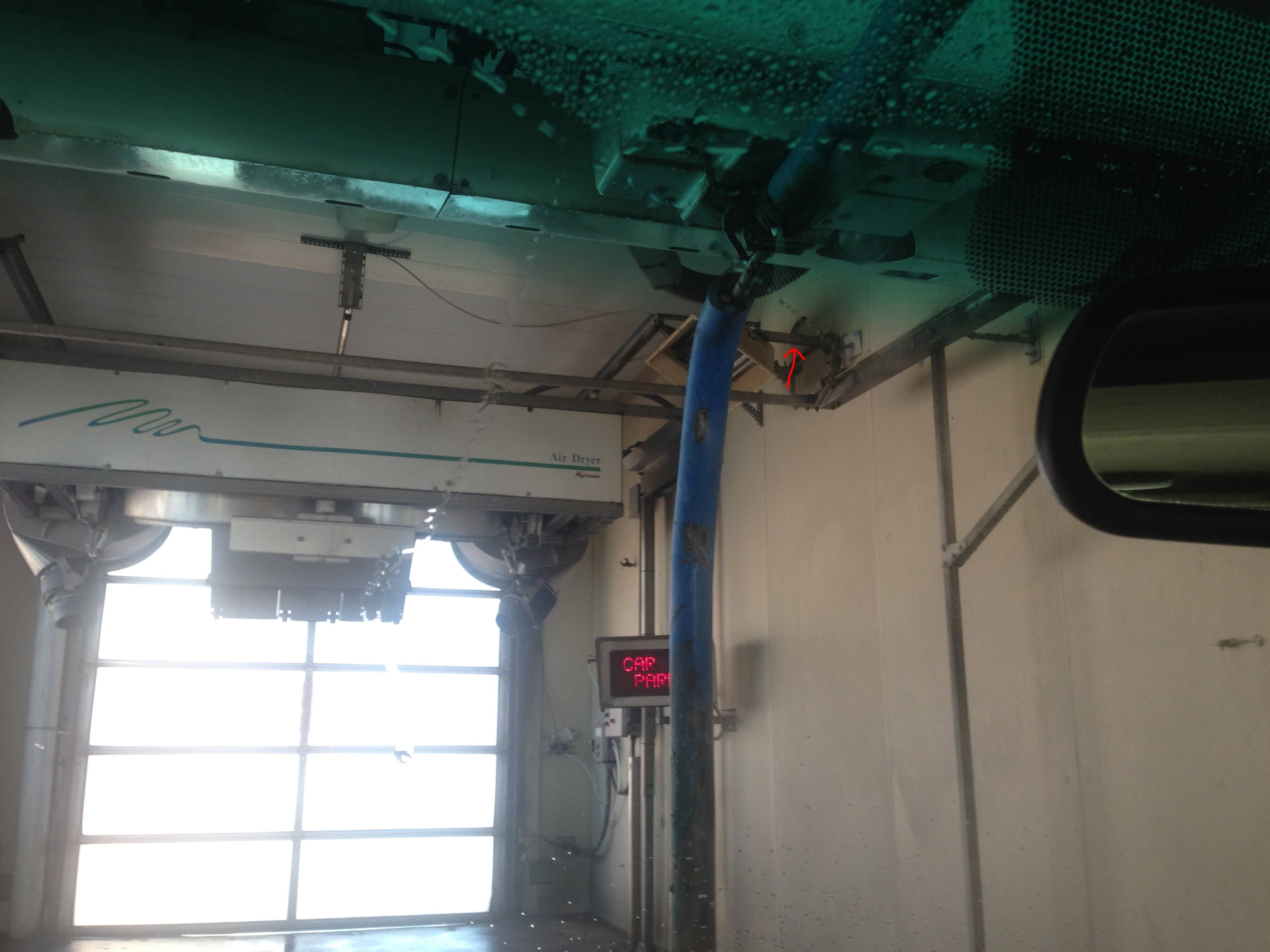 He did not give my vehicle any extra polish, but that would be a very ill omen indeed.

I got a pile of vocabulary merely from reading, and so I have been known to mispronounce a lot of words on occasion even though I use them correctly. This constantly amuses my beautiful wife, who grew up amongst people with greater spoken vocabularies than I did.

At any rate, I constantly mispronounce these:

There are many more, but these are the ones that come to mind.

The Springfield News-Leader has a story about the new dynamic message boards hard-coded into the Springfield traffic scene, and it’s almost critical:

Call it a model for how not to do a public project.

Plagued by delays, complaints and conflict, construction of the city’s Advanced Traffic Management System was an experience many would rather forget.

By the time the $3 million project wrapped up — more than a year after the original deadline — the mess had grown to include charges of biased oversight, a federal prevailing wage investigation and a threatened lawsuit.

“It caused us to look at several things,” Broyles said. “There are some lessons learned that, going forward, I think are really going to help us.”

At the cost of $3 million dollars and ongoing annual budget for maintenance, Springfield got a number of signs that mostly offer PSAs, like “Don’t drive drunk,” “Buckle up,” and “Don’t watch these signs–watch the road!” interspersed with information on conditions, like “It’s raining! Drive carefully” or “It’s foggy! You can’t see this!”, and the occasional road hazard warning, like “With our remaining road budget after paying for these signs, we’re fixing a single pothole, but we’re blocking all lanes between here and your home overnight.”

Oh, and some lessons learned.

None of which are related to not splurging on cool things of dubious utility that other cities have so Springfield needs.

I got this book from the library based on Atkins’ strong turn in the Spenser novel Lullaby. This book was not bad enough for me to swear off Atkins’ other books, but it’s not a very good book. Or, at least, it’s not a book enjoyed very much.

The book is a fictionalized account of the murder of an early twentieth century Tampa underworld figure named Charlie Wall in 1955. Atkins, a former newspaperman, was nominated for a Pulitzer based on some articles he did on the case, so he had a pile of research to novelize. And he did.

The book has two main characters, sort of: The first person narrator, a former newspaperman, tells the story as it happens but also from a double-effect narrator position in the present. Then, there’s a police detective, a relatively straight man on a corrupt police force, investigating the crime. But the narrative points of view don’t stop there. No, we also get segments of chapters from two other gangsters, Rivera and Trafficante, a Cuban woman on the run for stealing a ledger from Rivera, and an appearance by Fidel Castro, young revolutionary. You know, I recognize that the modern style is to hop points of view–I’ve done it myself–but this book jumps a number of times per character, and we end up with so many different points of view and characters that it’s hard to keep them straight. Especially since some of the lesser characters are not that well developed.

Okay, we’ve got that knock against it.

Secondly, the book is full of ugly flourishes included only for the grotesquerie. We have a little girl kicking the corpse of a man her father just gunned down until her father restrains her. We have the sodomy of a major character as a young boy because…. Because it was in Atkins’ notes, I guess. Some grungy adultery just for scenery. Bleakness and bleakness for no reason other than to emphasize the gritty noir.

Finally, we’ve got a plot about the murder of Charlie Wall and the maybe related search for his ledger which has–I dunno, the goods on his rivals, his secret accounts or something. It’s a side McGuffin, though, since the actual murderers aren’t after it, really, well, some maybe are. There’s no real justice for them, not in a satisfying end, and I’m pretty sure the first person narrator funds the Cuban revolution by giving the ledger to Castro at the end.

All in all, it’s punching above its weight as a crime novel, perhaps swinging for Great Novel, and it misses both.

I’ll try another Atkins book by and by, but I was disappointed with this one.

My mother-in-law got me this book for Christmas. Five years ago, she got me a two-DVD history of the Packers. I probably should have watched the DVDs first.

This is a little trivia quiz book designed to be a party game: you ask individuals or teams questions, and they record their results (score sheets included). The book breaks into four “quarters” of 50 questions each worth incrementally more by section and an overtime section.

Me, I just went through the book by myself. I didn’t rock it, as I’ve only been a zealous Packer fan for a decade now. I got a lot right where the answer was Aaron Rodgers, Donald Driver, Brett Favre, or Greg Jennings. I even got some from the 1960s right (I credit Run to Daylight and Instant Replay).

But overall, I should have watched the DVDs first.

It’s a fun bit of a party game for your next Super Semispherical Vessel Party. Hopefully next year, when it might be a meaningful game if the Packers are in it.