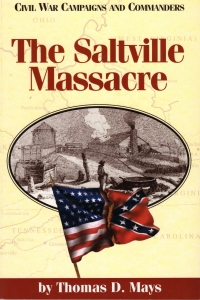 This book might make it look as though I have undergone the fundamental shift (mentioned here) about shifting my focus from reading about classical Greece and Rome to the American Civil War. However, although it might be a sign, it might also only be a sign that I was looking for something short and informative to read on the road. Which I did; I read this in a single sitting during one of my four hour nights at the dojo.

This book focuses on a single campaign/battle, the Saltville Massacre, and describes the events leading up to it, the battle itself including maps of all the major assaults, and the aftermath. It also includes numerous sidebars with short biographies of the officers on both sides. The book is a part of a series, of course.

The Saltville Massacre was an attack on Saltville, Virginia, by a Federal/Union army trying to wrest or destroy the saltworks there. The town and works were defended by a small group of Confederate soldiers and a small group of militia. The Union forces advanced and then stalled and tried to take some ridges but failed. After they withdrew, the Confederates took to the battlefield and killed any wounded black soldiers they found; additionally, a local irregular went into a hospital to settle a personal feud and to kill a couple more wounded blacks. The irregular, Champ Ferguson, was one of two Confederates hung for war crimes.

At any rate, as I said, it was short and informative. If one chooses to study in depth, one becomes used to the conventions of military science books and reading them becomes easier. The battle reminds me a bit of the Battle of Wilson’s Creek, the local Civil War battle, but since I live within sight of that battlefield, I try to work it into a lot of conversations. Another thing that struck me was the bridge between classical warfare and modern mobile warfare. Although much of the fighting is assaults on defensive positions, the book does include one mention of offering battle–that is, lining up and trying to get the other army to come out and meet you. I haven’t studied that much military science, but that does seem to have fallen quite out of favor for obvious reasons.

I don’t remember where I got this book; however, I’ll keep my mind out for others in the series and others of the kind. They’re quick reads and informative, and cumulatively they’ll make me smarter on military science and history.

I got this book for Christmas a few years ago. As I have moved to the Springfield area and actually live within walking distance of the Wilson’s Creek National Battlefield and along the old Wire Road where the troops marched, I figured I ought to read up on it, you know? Heaven knows I read enough history books about the suburb of St. Louis where I used to live.

This is a full on history book, researched meticulously from the records of the time, including correspondence from participants as well as news accounts in the participants’ home towns. And the home towns there were; both sides of the battle featured a large number of volunteer companies from places such as Kansas, Illinois, Iowa, Missouri, Louisiana, Texas, and so on, most of the companies representing individual towns. But when the call to arms came, many able men joined either to punish the traitors or to defend themselves from the treasonous. Note that unlike some of the history books I’ve read in the past centering on a historical person and making that person somewhat heroic (see Scipio Africanus and Hannibal), this book is very evenhanded in treatment of both sides.

Now, for those of you unversed in your Civil War history, Wilson’s Creek was a very early battle. The second of the war, as a matter of fact, following the first Battle of Bull Run. In August 1861, west of the Mississippi, the two armies marched quite a ways from their logistical bases, kinda felt each other out for a while, and then had a battle. General Lyons of the Union side marched down from St. Louis, essentially, and General McCulloch marched up from Arkansas and hooked up with the Missouri State Guard headed by former governor Price. Both sides lacked in intelligence and constantly acted on rumors of major enemy concentrations and both sides had serious trouble keeping their armies fed and shod (see my post about selling shoes to the armies in the Civil War).

At any rate, one August morning, the Union army snuck out to catch the rebs by surprise and attacked from two sides. They might have wanted to forestall an attack on Springfield until the Union Army had a chance to retreat to Rolla or they might have thought they could beat the superior forces of Price and McCulloch. The battle started well for the Union side, but a couple twists of fate and they ended up retreating not only from the battlefield but also from Springfield. So, to make a short story long, the Federals lost.

But it’s a fascinating look at this battle and will probably be a gateway for me into the large collection of Civil War history books I inherited from my uncle-in-law.

It’s a real shame that a lot of people don’t read history any more. It really gives one perspective. And a lot of interesting stories to tell, particularly if the history occurred near where you live.