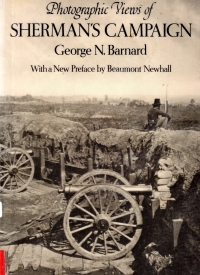 It’s football season, so it means it’s time here at MfBJN to start writing book reports on art, photography, and poetry books that I can read during the commercials of football games. This book should have been the first of the series, but I didn’t actually get to it during the football game.

The book is a Dover reprint of a work by a nineteenth century photographer. Dover reprints a lot of stuff that goes out of copyright and priced it at a couple bucks. So it’s the same book as appeared soon after the Civil War that was the subject of many of the images.

The photographer followed Sherman as his army moved through Georgia in the latter part of the war. The early part of the book contains images from the campaign; the latter part depicts the battlefields and landscapes after the action occurred because the army was moving too fast for him to keep up with the elaborate processes of photography.

The reason I didn’t get to the book during the football game is that the first ten pages or so are the photographer’s notes from the campaign. They vary from high-level name checking of the numerous generals and officers in the campaign to very detailed troop movements, and they’re not smoothed out or edited to a consistent level of detail. Unfortunately, this makes it tedious to follow during or after a football game. But the fellow was a photographer, not a journalist.

And the images are images of the Civil War and thereabouts in Georgia. The photography makes the war slightly more real than the Roman Civil War under Caesar or Scipio’s chasing Hannibal from Italy.

Strangely, this is a former Christian County Library book, which means I bought it instead of inheriting it from my beautiful wife’s uncle; when he passed, he left many of his books to me, and he had a lot of detailed and scholarly work on the Civil War (including a first edition of Grant’s memoirs which I’ll eventually read and probably devalue with Cheetos dust). So when I veer from my current Ancient/Classical Greece and Rome kick, perhaps I can binge read on this topic.