This year, I have begun the process of DeRooneyfication.

Sometime when I was reading some of his columns some number of years ago, I related to one of Andy Rooney’s situations. He mentioned going into his basement workshop and finding a number of projects that had been off to the side for a number of years, including a chair that needed fixing and whatnot. Even though I was probably just the long side of thirty at the time, it resonated with me, since I’d been collecting projects and materials for projects since before I got married. Now that I’m just the short side of forty–and soon on its long side–I decided to start finishing some of those projects.

Most of them aren’t long-term, time-consuming projects, either. Most only require that I set aside a couple of minutes on consecutive nights to take the time to complete the steps the project requires. They require that I put all the pieces and material together in one place and get the things done. That’s all.

Why have I decided to do it suddenly in 2012? Perhaps it is that birthday ending with a 0 coming up. Perhaps it is the new multivitamin that I’ve started to take because I bought it some years ago and might as well use (almost a deRooneyfication project of its own). Maybe it’s a function of having cleaned and sorted my garage and finding the projects and the tools and materials to complete them. Regardless, I’ve started completing projects of some procrastination. These are their stories.

For those of you hoping my first project would be something that I bought in middle school, I’m going to disappoint you. This project has only been sitting on my desk and office floor for about a year.

A while back, I decided that an old cap-and-ball pistol I inherited from my father would make a good shadowbox display. By “good,” I mean “a.” The pistol is no collector’s item; it’s a 1960s cheap replica of a naval pistol, and it’s not in very good shape. The metal is pitted and discolored. But it is one of the three things I inherited from my father, so I thought it would make a better display item than a stuffed in a box item. So I bought a shadowbox for it, cut a piece of wood to mount it on (the shadowbox itself was backed only by a small piece of cardboard that would probably not hold a pistol. I cut the matting from the inside of the shadowbox’s glass so the entirety of the gun would display, put the gun and the wood together, tried to close the back, and….

Damn. The wood plus the gun were thicker than the shadowbox.

So the shadowbox sat on my floor, leaning against my filing cabinet for a year.

In the meantime, my grandmother sent some rocks for my boys. Not to throw at each other, but geological specimens to admire and learn from. These sat on my desk for about a year. In my defense, it’s a big desk, with lots of space for things to sit for a year undisturbed.

So I gathered them one Sunday morning after having cut a new piece of wood to use as backing (the first piece having recycled into the collection of wood in my garage or shed or appearing in a woodburning project in the intervening months). I covered the wood in black cotton fabric, laid out the rocks, drove nails around the rocks to hold them in place, and voilà! 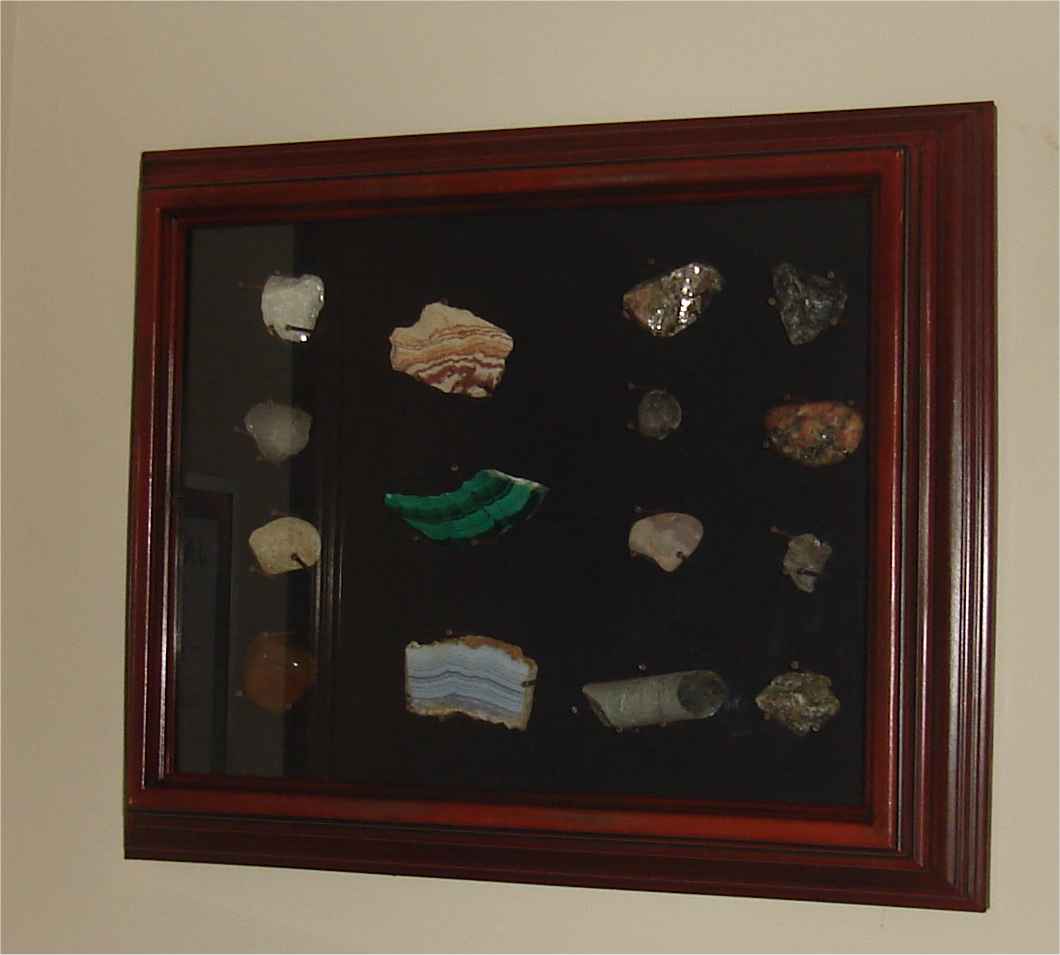 There it is on the wall. The total time of completion: About an hour, maybe an hour and a half. The cumulative time the elements sat incomplete: About a year, maybe a year and a half (although under a year, probably, in calendar time).

As a bonus, with this project, I used up the very first box of nails I ever bought: 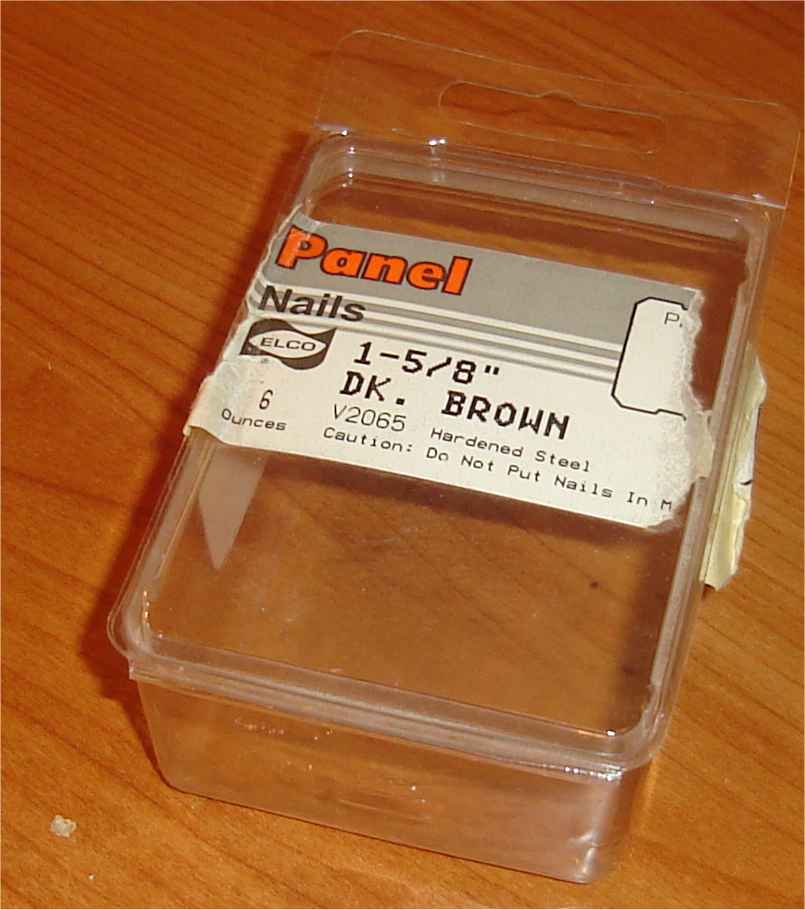 You never forget the first box of nails you buy. I bought this one to hang things on the wall in some early adulthood domicile, and you can see that they’re paneling nails, so I wasn’t particular about what I bought for that task. For this task, though, they’re good, since the brown color doesn’t show against the black fabric.

Also, note the small hole in my desk top. A souvenir of this project, when I drove one of the rock-retaining nails too deeply through the wood and fabric.

But I was just getting started at deRooneyfication.