Sometime early in my marriage, my grandmother gave me a lamp, a nice glass lamp with brass-colored steel trimmings. In our first house in Casinoport, we put this lamp in a place of honor: the floor of the closet in our spare bedroom, the one where we had our weight bench and, later, a number of arcade games.

In our defense, we did not–and still do not–have end tables where one traditionally puts table lamps, and our horizontal surfaces were at a premium. So we stored it, awaiting further accumulation of furniture that would eventually blossom as our marriage passed the cotton, linen, leather, and wood anniversaries.

However, we had a cat who sometimes liked to urinate in dark places. As we cleaned out that closet at some point, we discovered he had urinated on the lamp, ruining its felt bottom and causing the metal to oxidize.

No problem. I would fix it.

Fast forward approximately a decade. Well, not so fast: allow me to mention that we moved after six years at Casinoport to Old Trees, Missouri, where I had a small workbench area in the utility room to store the lamp for the three years we were there without fixing it. Then we moved to Nogglestead three years later, and the lamp came with us. While cleaning the garage as I mentioned, I found the lamp underneath the workbench between the workbench legs and the wall. Needless to say, the oxidation was worse.

But in the two years we’ve lived here, I’ve gathered a number of colors of paint, including an acrylic gold that I thought would replace the original brass nicely.

So I sanded the metal again and applied the gold acrylic. It was very thin and did not cover the metal very well. I applied a second coat to the very bottom, and the second coat did not “coat” at all.

So I procured a primer (which, of course, is the way to go if you’re going to paint acrylic on metal). I applied two coats onto the metal parts of the lamp and tried the metallic acrylic again. Again, the metallic coverage was not very good; it was essentially streaks across a white background. So I applied a couple of coats of a yellow-gold non-metallic acrylic to give it a nice yellow base to work with and then applied a couple coats of the metallic gold paint. Now we’re succeeding.

The shade was lost to the vagaries of time and moving, so I replaced it and decided to rewire the lamp and replace its hoop to cover the splatters of paints upon them. And, voilà! 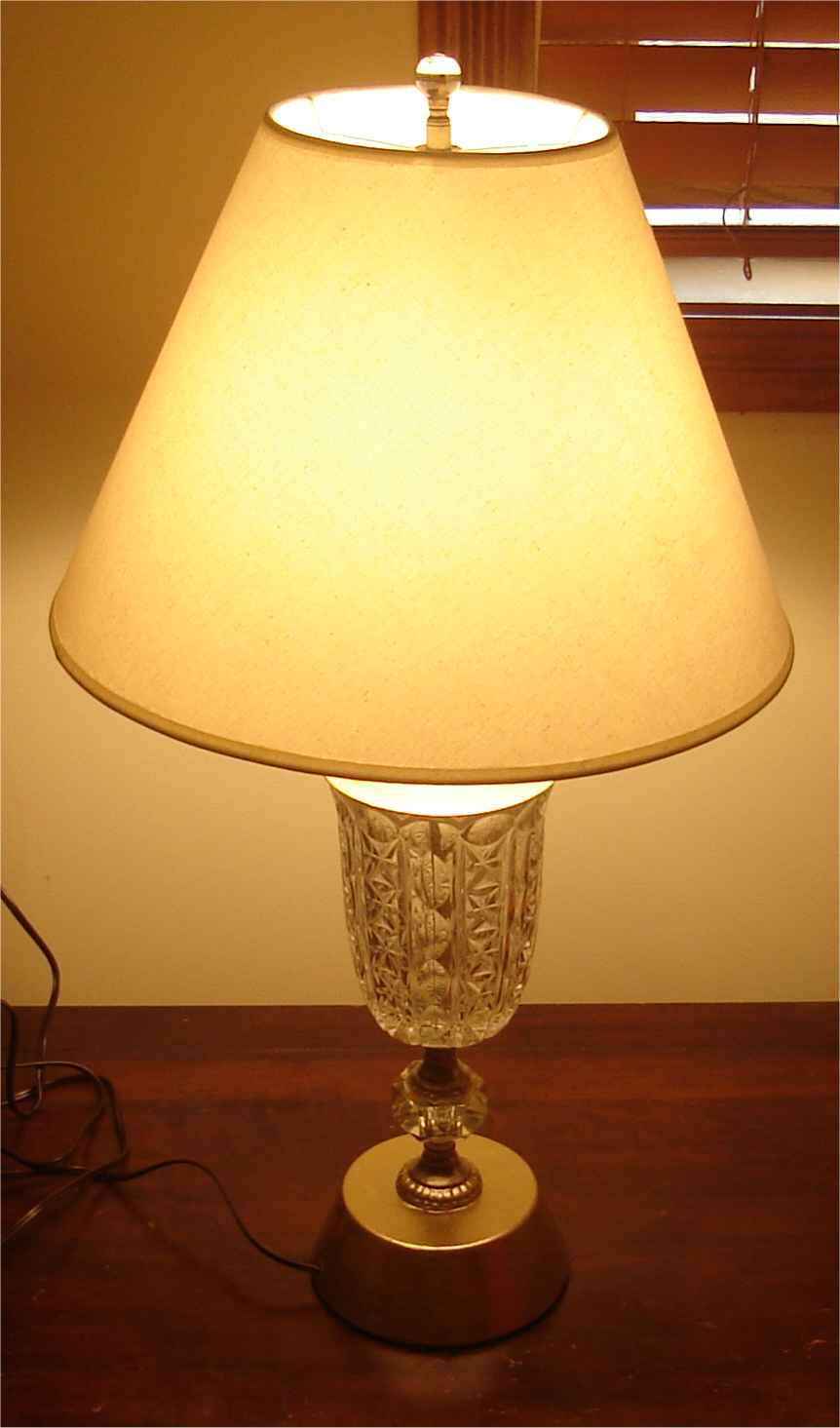 We’re several years past those early anniversaries and have a number of horizontal surfaces to put a lamp. For now, this lamp is on a far desk in my office to provide indirect illumination of my workspace. It might end up next to my reading chair to help illuminate my nightly reading. But it’s done.