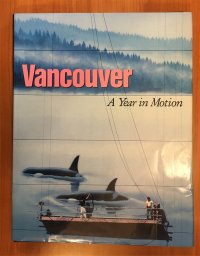 This is the official book of the Vancouver Centennial celebration in 1986, and its schtick is that a series of photographers went out to photograph the city in its centennial year. So it starts in January and runs through December and includes the building and running of the exposition that marks the centennial.

The photos look to have been chosen to illustrate aspects of Vancouver from its economy to its wonderful landscapes, and the book is a little text heavy as it explains how awesome Vancouver is. The amount of text takes away from the images, and the images themselves, as I said, are not chosen for quality or their photographic skill alone.

So this is not an art book.

It is interesting, though, that of all the city-touting photography books (touting cities such as New York, San Francisco, and Detroit), this is the only one to specifically pay homage to the city’s strip clubs, complete with photo of an exotic dancer on a pole. So it has that going for it.

Worth a browse, but it requires some attention. For a coffee table book, it is attention-intensive. So I browsed it during football games not featuring the Packers.