It’s Mardi Gras time here in St. Louis, which means Soulard is putting on its schizophrenic finery wherein it tries to celebrate in a family-friendly fashion the last minute drive to get in as much debauchery as possible before Lent and repentance came due. But that’s neither here nor there.

Fact of the matter is, I’ve worn face paint twice in my life, and neither time was for a sporting event. The first was, in fact, Mardi Gras 10 years ago. A couple of my friends and I decided to go down the Saturday before Fat Tuesday and take it all in. Familiar with the concept of the New Orleans Mardi Gras and its festivities, I said, “Hey, people paint their faces for Mardi Gras, right?”

So I designed a concept for my motif: On one side, the happy drama mask, and on the other side, the unhappy drama mask. Done in black and white. We went to Johnny Brock’s and got some black and white facepaint so we could do the happy side in black on white and the unhappy side in white on black. Johnny Brock’s actually had colored hair spray, too, so I messed the hair up manically on the white side and patted it down flat on the black side. My friend and fellow displaced Wisconsinite Walter, an artist by self-definition, actually did the face painting (and signed his initials under my chin). Dressed in black and white completely and wearing a trenchcoat, my Mardi Gras garb was complete: 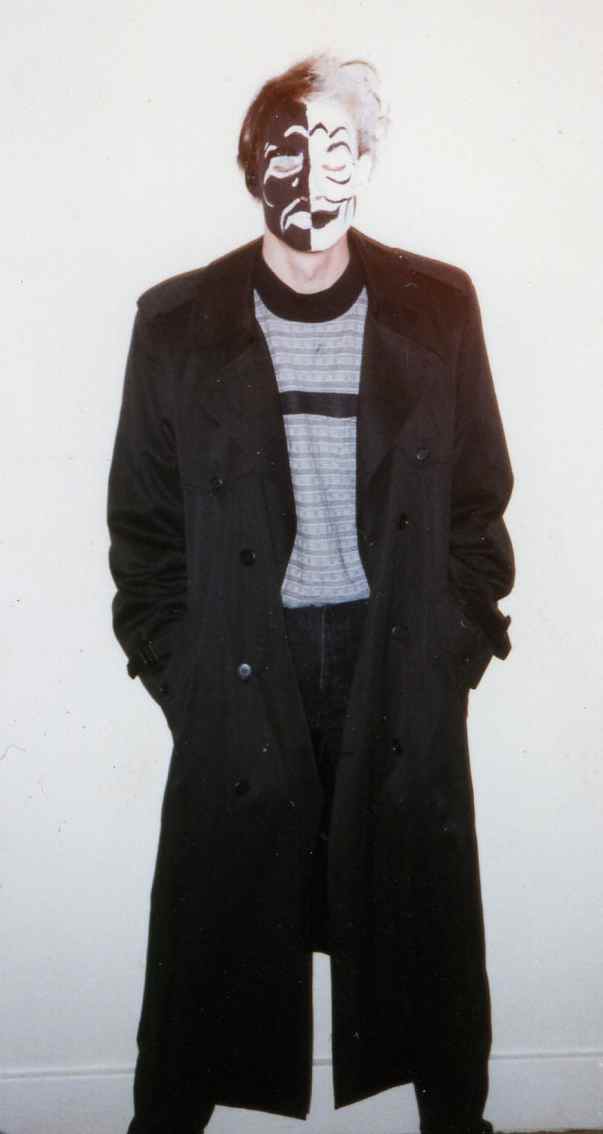 So my lifelong St. Louis resident friend put on purple mask, and off we went. Once we got to Soulard, I discovered the “Sure” had an asterisk on it. People paint their faces up for Mardi Gras.*

* In New Orleans and Brazil.

I was one of three people in face paint among the thousands thronging the streets and bars. People thought I was supposed to be The Crow, the Joker, or Ace Frehley. Only one young lady correctly identified it; she was a Webster University student and quite probably in the Theatre Department. Somewhere along the line, my lifelong St. Louis resident friend ditched his mask to better blend in with the “beads are the Mardi Gras costume” crowd.

But it was a good night. We drank liquor until the police chased us out of Soulard and ended up at the Venice Cafe, where a bunch of older (mid 40s) women hit on me and kissed on me to my chagrin. My lifelong St. Louis resident friend explained that, at the tender age of 25, I looked like a middle aged hottie. Needless to say, I haven’t spoken to that friend since before the turn of the century.

Wow, and I still wear that trenchcoat. Maybe it is time to get a new one.

As I mentioned, I’ve painted up twice in my life, and both were in that year: 1997. Perhaps one could read something psychoanalytical into that. But the second time, in the autumn, was at GenCon, the roleplaying game convention. My lifelong St. Louis resident friend from Mardi Gras, my best friend from college, and I drove up to Milwaukee to attend. Even though we all had jester costumes, something on the GenCon sales floor triggered my imagination; I think it was some press on fangs. Suddenly, I wanted to enter the costume contest. As the Weresmurf:

I bought some blue face paint and the aforementioned fangs, and my friend sacrificed a t shirt. I plunked down the entry fee and took my shot at fame. The contest featured a bit where you came on stage, and the MC introduced you. You could write your own intro and have the contest leader make special preparations for you. I asked them to lower the microphone and wrote out my introduction.

When my time came, the MC read my beautiful words: “When the moon ripens to fullness, something dark prowls Smurf villiage. It’s the Weresmurf?” Actually, I didn’t pen the rising inflection at the end, but the MC turned it into a question. With that, I leapt from behind the curtain, ran sniffing and hunched from one end of the stage to another, snarled at the MC, and ran up to the microphone, where I preceded to howl out the Smurf theme, finishing with a poignant “root rooooo!” I then leapt from the front of the stage, ignoring the stairs so carefully pointed out by the staff, and ran up the aisle snarling and sniffing until I was out of the spotlights.

At the time, I was a regular on the poetry open mike/slam circuit in St. Louis and had hopes I could get some kind of thing going where I’d give readings at colleges or whatnot (I’d seen the Nuyorican Poets Live that year, too, so it wasn’t out of left field–you know, like painting oneself blue for fun). But the largest crowd I ever performed in front of to that point–and let’s be honest, since–my only vocalization was a Smurf howl.

Adding salt to my pretentious wounds, the only national magazine exposure I’d gotten to that point (and, honestly, up until last month) was in the December 1997 issue of Inquest, which had a photo essay from GenCon: 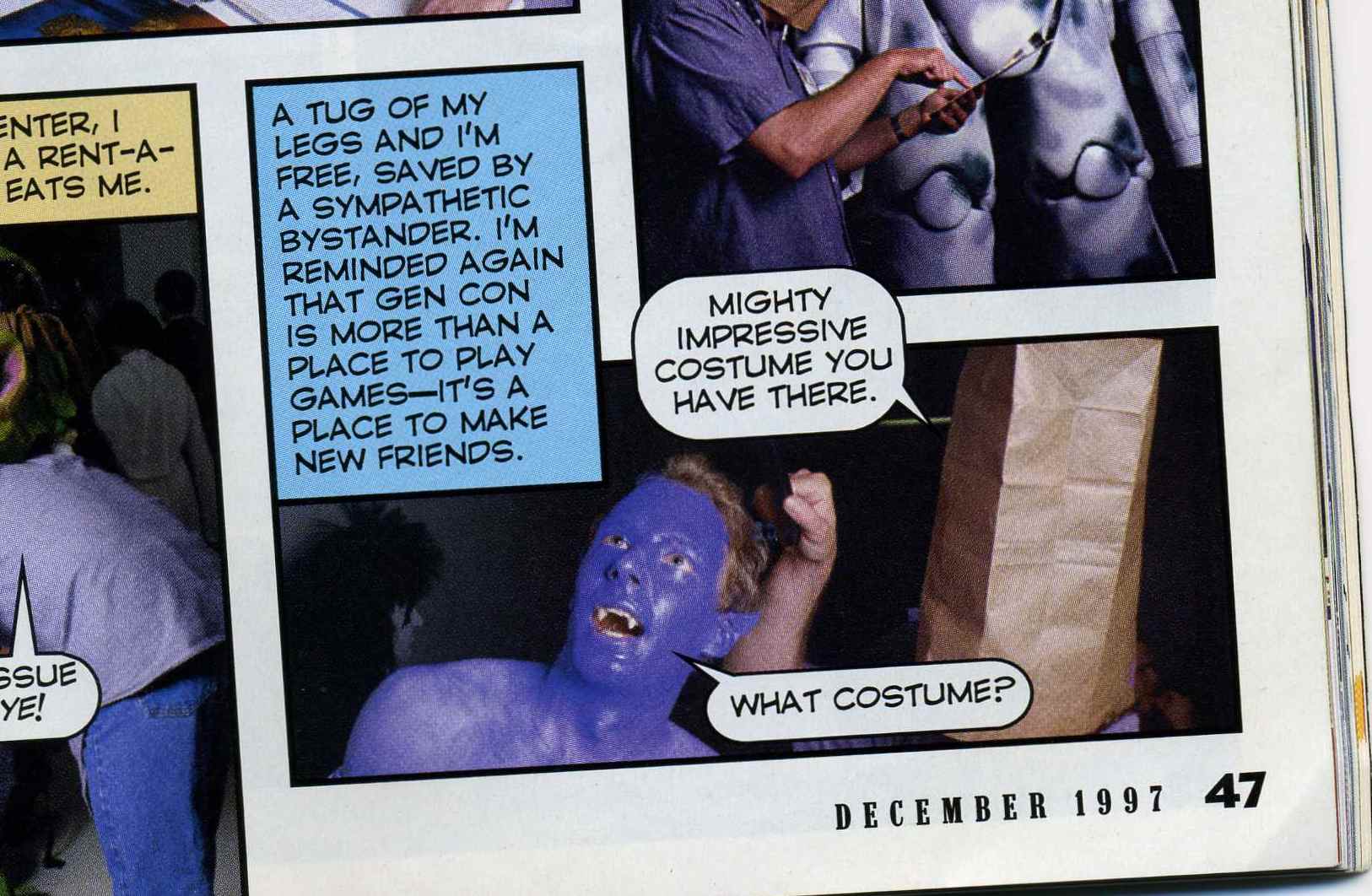 That’s right, it took me 10 years to get my name into a publication with a circulation rivaling that of my appearance in blue paint with a humorous dialogue balloon pointing at my mouth. But wow, blue paint really does bring out my blue eyes.

On the plus side, I did win my category, so I came home with a trophy dish and a pair of commemorative d6. Of course, the category was the equivalent of “everything else” and my only competition was a couple of teenaged girls who put bones in their hair and tried a sitcom skit about feuding vampire sisters. So perhaps my resounding victory isn’t a testament to my genius or proper sense of the absurd and only reflects that I wasn’t as bad as the kids.

But I got the trophy, and I got the Polaroid, and I got the two d6s. I’ve also got a scannerful of photographic memories of that brief moment in my youth where painting my face seemed like the right thing to do at the time. I don’t know that that time will ever come again, but I haven’t been to Lambeau Field, either.