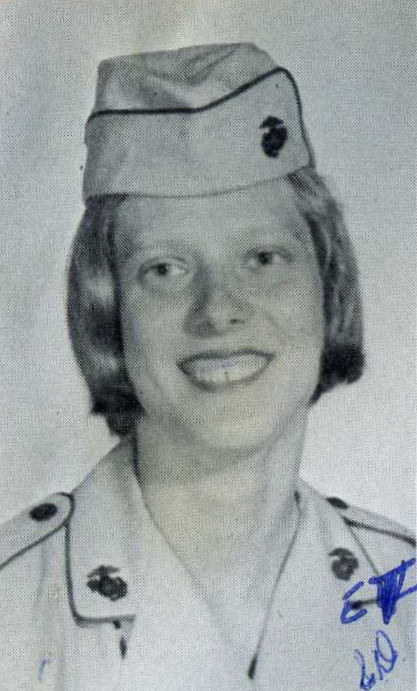 Let me tell you about my mom.

You might not know this about her, but she was a Marine. Maybe you’ve never talked to her, or visited her home decorated with eagles on anchors, or come to a holiday dinner where she carved the turkey with a ka-bar, but she was, and she was rightfully proud of her service. On her way to the induction to be sworn in, she caught a ride on a fruit truck and ate seven pounds of bananas to make minimum weight. She almost did. They let her in anyway. She served her country.

She also fought for what she thought was right in her own way. As my brother and I were going through her effects, we uncovered a number of letters. My mother wrote her senators, the Secretary of the Defense, the Secretary of the Army and gave them the what-for all the time. The response letters start out form letters, but ended up by starting, “Now, Glenda…..”

She was giving. She would give you the flannel shirt off of her back, and then she’d go to her closet, her drawers, under her bed, and to that secret wardrobe in her basement to give you more. And then she would tell you she bought that shirt at a yard sale in 1988 for a quarter, because she remembered those things.

She was also a doer. I have a friend who’s Canadian, not that there’s anything wrong with that, who never met her, but knew that much about her. Whenever I’d tell him I was going to do something around the house, he’d say, “You mean you’re going to have your mom do it.” That stems from a particular incident where a thunderstorm had broken some tree limbs, and I needed to cut them out of the trees. I had a ladder, and she had a chainsaw, and together we had a solution. She came over, and I had to block the ladder to keep the 58-year-old woman from going up to cut the limbs. Maybe she wanted to protect the investment in the chainsaw. But that’s who she was. Someone who would like to help you to the point of doing it for you, and ready to do things. She refinished her basement, refinished a bathroom, and she was quietly proud of what she did.

She was a great mother; she raised the two of us on her own. She was a good sister and a great friend, who enriched us all, but some of us more than others, particularly at the Saturday night card parties.

Thanks to the Women Marines Association, the American Legion Women’s Post 404, and Marine Corps League Gateway Detachment for attending.

I also want to thank members of the Patriot Guard for escorting her to Jefferson Barracks. She lived nearby, and any time she saw them performing an escort, she would comment appreciatively.