I’ve removed the whiteboard that I put on my office wall when we moved in. It’s out of arm’s reach from my sitting position, and it’s outside the rolling radius on the carpet protector beneath my chair, so I really didn’t use it for much. I made columns for home projects, things to write, and other things to do, and I might have written a thing or two under the column headings in years past, but I didn’t actually strike much off of them. I used my whiteboard a lot when I worked in an office and I could roll a couple of feet to it and add a task or strike one off.

So I took the whiteboard down. I shall likely clean it and cut it to fit into monitor bezels for smaller whiteboards.

Instead, in the space, I have put my mother’s spoon collection (or I will, when I polish them all) and two paintings by my great grandmother. 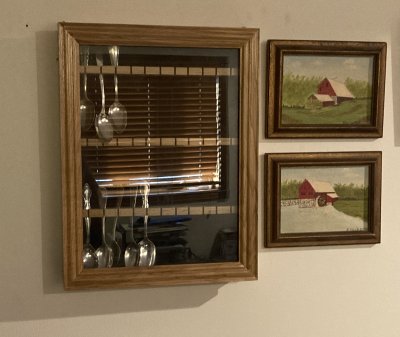 I bought a spoon cabinet whilst Christmas shopping last year, as although I had inherited my sainted mother’s spoons, I apparently did not get her rack.

The spoons hung on the wall near these paintings in our apartment in the housing projects forty years ago. We had the paintings on the wall in our dining room at Nogglestead, but the dining room is the only place where our walls have changed much over time. We replaced the paintings with a chicken key hanger that I wood burned several years ago, and they’ve been floating on my office desk or beside it since.

Their presence on the walls means that we nominally have four generations of Noggle art on the walls. Well, had. These paintings, a sketch by my youngest aunt on the Noggle side, and two pot holders that came from art that our children made at school. Sadly, the potholders replace multimedia art that my grandmother did, which is in my office closet awaiting a good place, I guess.

I was going to polish all the spoons at once and hang them, but it’s turning out to be a harder chore than I’d expected. Individual spoons are taking fifteen minutes to polish. I remember sitting down with my mother and brother maybe annually and doing this at the table in the apartment and maybe the trailer, and it never took us that long, but they’ve been in storage for at least the twelve years we’ve lived at Nogglestead.

As I’m working on them, I have noticed that they’re mostly not collectible spoons or even silver. Instead, most of them are just stainless steel patterns that you would get in a grocery store. My aunt who worked for the government traveled for work sometimes and brought my mother a spoon from Washington D.C. and pre-revolutionary Iran, but my mother did not travel far in those days. The corridor between St. Louis and Milwaukee, mostly, with an occasional trip Up North and one vacation in Rockaway Beach, Missouri, which is about forty minutes from where I live now. It was only after my brother joined the service that she travelled, visiting him at his graduation in California and at his postings in Hawaii and Quantico, Virginia. She would then take cruises with her sister and went to Las Vegas for her sister’s wedding, but she was past spoon collecting then. So most of the spoons that I am polishing are stamped Oneida on the back.

At any rate, I got the spoon cabinet in early or mid-December, and I started the polishing project in January. Las Vegas puts the over/under on my completion of this project in April 2023. Perhaps I should enlist one or more children to make family memories. But they, as I was, are not keen on those kinds of family memories, although it was gratifying to see the silver emerge from beneath the tarnish.