Robert Davies, Web developer. Daryl Simon, tech support. Michele Isbert, failing novelist. Kevin Horton, marketing assistant. They were putting in their time, waiting to get rich from the stock they owned in nTropics.com. But one autumn day, they found themselves out of work, part of the new CEO's new plans for the company. The same new CEO who personally bought a gold bar at auction and put it on the company"s Web site as a symbol for the company's prosperity. Or maybe just his own vanity.

You know where this is going, right? Stealing that gold bar is the principled thing to do, but only if they can do it the right way, without too much risk to themselves. Con games, breaking and entering, and a host of other crimes--they're just like live action hacking, right?

Robert Davies tried to log onto FuckedCompany.com, and he could not, and he knew he was fucked.
The chair squeaked as he leaned back. He double-checked the URL in the browser's address bar; it was correct. He pursed his lips and typed the URL again. Again, Microsoft Internet Explorer showed him its regular, unhelpful, the-page-cannot-be-displayed screen. It suggested he might want to check his browser settings.
Robert typed in www.nTropics.com, the address of the Web servers sitting in the large, bomb-shelter safe room in the basement. His company's site popped up, with its neo-Aztec cursive logo and gold bar icon. He typed Instapundit.com, and the popular blog loaded. His Internet connection was indeed active. But when he tried to get to FuckedCompany.com again, the same.
The first time was happenstance, the second time coincidence, and the third time, Auric said, was enemy action. This was the other shoe, and the axe was going to fall, and he wanted to be sure, so he went looking for Daryl.
Daryl was the local guru. Whenever someone with less than three months' experience at nTropics.com needed some help with his or her workstation, that person went to the two network administrators in the unlit office that probably was a supply closet before nTropics took over the building. Those who had more than six months' experience, few as they seemed to be, would go to the same guy that the certs-from-a-book weenies did: Daryl Simon. So Robert made his way up a half flight of stairs into the Customer Support Room.
Daryl studied his computer screen. His visibility, and the high level of background noise imposed by fourteen other technical service reps all in open cubes, didn't bother him. When Robert got close enough, he saw Daryl was reading some system board review, dazzled and probably slightly intoxicated by the speed of the front side bus and the RAID capabilities.
"Ahem," Robert mentioned after standing for a moment at the edge of the half wall, just over Daryl's shoulder and conveniently noticeable for anyone, probably, but Daryl.
"What's up, Robert?" Daryl said.
Robert dropped his voice. "I can't get to F Company."
"What?"
Robert hated to say it, so he hissed, instead. "I can't get to FuckedCompany.com!"
"You kick your Cat5 out?"
"No, I haven"t lost connectivity, I just can't get to the site. That means they're blocking us, and that means we're going out of business."
"What's up, guys?" Kevin Horton appeared and asked.
"Robert can't get to Fucked Company, so we're all fired." Daryl tapped on his keyword.
"What's Fucked Company?" Kevin said.
"The Dot-Com Deadpool," Robert said.
"It's a rumors site," Daryl said. "When a company's thinking about layoffs, someone drops Fucked Company an e-mail and the guy puts it up on the Web. A lot of times he's got actual e-mails and whatnot. Mildly amusing."
"As long as you're not on it," Robert said.
"If you can't get to the Web site, why don't you just can the net admins, Robert? Why do we all have to pay for their incompetence?" Kevin rubbed his cheek with the arm he was leaning on. Elbow up, he looked foolish instead of nonchalant, Robert thought, but Robert's idea of nonchalance tended to parade rest. Hands behind the back in a non-threatening way. Kevin liked to repose like that, in his Dockers and collared shirts, dressed in business casual to rank him somewhere above the casual information technology rabble. He probably stuffed a sock down his trousers, too.
"Yeah, I can't get it either. Their server"s probably down." Daryl's machine displayed the non-helpful Internet Explorer screen, too.
"Pud's always saying that other companies block the site from their intranets right before they lay off forty percent."
"Who's Pud?" Kevin said.
"He runs Fucked Company," and Robert knew he wasn't getting anywhere.
"Robert gets laid off and fired more than Chicago Blackhawks coaches." Daryl said.
"I used to work in a grocery store," Robert offered as an explanation. He'd seen more mustached Mikes start out as assistant managers or store managers, only to be canned when the store failed to pull in its four percent in a declining economy and a declining urban environment.
"Can't you get around it?" Kevin said.
"Get around what?"
"If they are blocking it out. Go ahead, show him."
"All right." Daryl looked around.
"You going to spoof your own IP address to get around the firewall?" Kevin said.
"You been taking community college classes again? Spoof your own IP and the domain server won't talk to you." Daryl tapped at the keyboard, zooming through the menus and dialog boxes in his Internet browser without the mouse. He liked that. Seventies hackers didn't need a mouse back when the MIT and Bell Labs boys stayed up for days with machines with less power than a cell phone and loved it. He was born fifteen or twenty years too late, into a world where to be a computer guru, you had to be esoteric. But he was. He looked around to make sure no supervisors or collared shirts besides Kevin were around him. "This is a proxy server in Vancouver that doesn"t keep logs. Forget this address." And before they could see it, he had typed it into the edit box and tabbed to the OK button and hit the space bar.
He hit the combination of keystrokes to refresh the screen, and it started downloading, and Robert felt the flash of triumph that trumped his dread.
NTROPY.COM

The going-nowhere travel company https://www.nTropics.com started the day with a lame-ass pun for a name and is going to end the day with 33% less staff as they begin the slow decay to nothingness. Rumor has it, they've also blocked us, too. Enjoy your vacations, suckers.

"Oh, shit," Kevin said.
"I knew it," Robert offered as consolation.
"That does suck," Daryl said.

This really should not have worked as a novel: technical descriptions tend toward the mundane, and most of the techies I know are decidedly short on drama. What makes this worth your time is Noggle's attention to detail: J. Random Noob will appreciate the extra exposition, and your local expert will nod, "Yeah, that's exactly the way I'd do that. If I were going to do that, which of course I'm not." There might be a hair too much geographical exposition -- by the time you're finished you should be able to hire on as a cab driver in St. Louis County -- but no matter about that. The plot is more than sufficiently twisty; I'm pleased to report that I did not even come close to predicting the way it ended. And if the dialogue meanders a bit, hey, that's the way these people talk. I've heard them, and so have you.

The Adventures of Roberta X:

Where Larry Correia’s fictional world postulates our world with a barely-hidden subculture of every monster you ever heard of, the only “monster” in Brian J. Noggle’s John Donnelly’s Gold is a passing mention of the eponymous job-placement company. Nevertheless, it, too is quite an adventure and one that will have you wondering how it all turns out until the very end. It may be his first novel and self-published at that but the writing is quite good (and his proofreading a zillion times better than mine). This is a satisfying story; I don’t want to spoil your fun by telling too much of the plot, which concerns laid-off IT workers (a group of very well-drawn characters) and the twists and turns of their efforts at subtly-executed revenge. I got a review copy but would happily pay full price. Recommended!

Is it perfect? No, and that's why I pointed out it's a self-published book. Brian has written a fun tale that combines plenty of adventure with a lot (sometimes too much) exposition about the technical steps involved in hacking a website with a live feed. Think: Ocean's Eleven but replace Brad and George and all of their pals with four geeks, and you've got the idea.

John Donnelly’s Gold is Mr. Noggle’s first novel. It was a very enjoyable read and gives some interesting observations into the human nature of today’s twenty-somethings.

The best revenge isserved cold? A life well lived? For a quartet of recently laid off high tech workers, the best revenge is plotting to steal a gold bar from their former employer's house. Thus begins this caper novel and it's chock-a-block full of hardcore hacking, digital devilment and Gen X angst.

The story is told in straightforward fashion with the chapters given titles in a style reminiscent of mysteries from the Golden Age. Each of the four is given their due as we hop from the thoughts of one character to those of another and another until all have been heard from.

This is Noggles' [sic] second published novel [Actually, just my first. –bjn] and in it he has woven a story where the action is tight, the characters are believable, and the setting is realistic.

If you test software, if you do technical writing, tech support, or programming, in North America in the early 21st century (especially if you are a dotCom survivor), this book is for you.

A good description for it would be a slo-mo electronic caper story. There's no doubt the author knows precisely what he's talking about with the technobabble; the story's details write his resumé for him, and impressive it is. And the ending's perfect.

Brian J. Noggle, I mean “I,” has worked in the IT industry for over a decade as a technical writer and in software quality assurance. As I graduated college with a degree in Writing Intensive English (and Social Philosophy), I’ve been a writer of sorts off and on my whole life. John Donnelly’s Gold is my second completed novel and the first did not completely suck. Regardless of how much you might think this book sucks, know that it is only a maximum of 80% of the suck of my first attempt at a novel.

I wrote the book while working at a start-up, and I loved to tell my bosses about how the novel I was working on was about a crime spree of vengeance after an employee at a startup got laid off. I thought it gave me job security. They probably didn’t give it another thought. Fortunately for them, none of them owned a gold bar. Also, I did not get laid off.

My other writing work has appeared in small literary magazines (Artisan Journal, Show and Tell, and whatnot), national periodicals (History Magazine and Writers Journal), and trade publications (The Testing Planet). 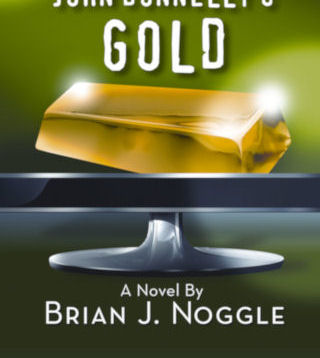