This weekend, my beautiful wife and I attended the Springfield Contemporary Theatre presentation of Black Comedy. 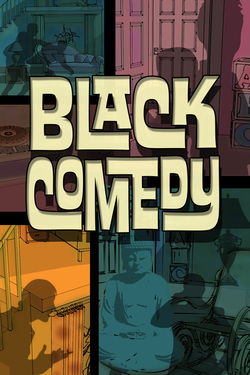 In this comedy, a British sculptor named Miller is going to have a busy night: In addition to meeting a wealthy collector who can make his career, he’s also meeting the father of his fiance. To tony the place up, he’s borrowed some furniture from his antique collector neighbor. Before any of the important people arrive, however, the power goes out and his flat is left in darkness. His neighbor returns early and an ex-girlfriend show up, and a comedy occurs in the dark apartment.

As staged, the play took place in the blacked out apartment, but to the characters, it was darkness. At the beginning and end of the play, when there is light, the actors moved in darkness. This allowed the audience to see a lot of the slapstick tumbling and precise movement where the characters could not see anything. The performances were good, and the lead–Miller–was outstanding.

The Springfield Contemporary Theatre is celebrating its 22nd season, but I’d never really heard of it before. The venue is a very intimate little room downtown, with about a hundred seats. Maybe. We sat in the third row, and we could easily have shaken hands with the actors. A number of the theatre patrons knew each other, and it was the most intimate setting for drama that I’ve ever experienced. It was a smaller venue than the theatre company I volunteered with in the last century, where they played to church gyms which were cavernous by comparison.

Now that I’ve found this little theatre group, I’m going to have to attend it frequently.