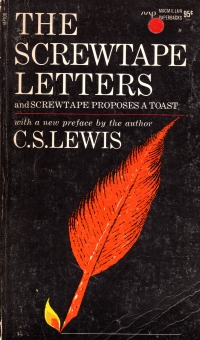 This book collects a series of essays Lewis wrote for a local periodical. Perhaps essays is the wrong word, as they are letters from a superior demon in Hell’s bureaucracy writing to a nephew who’s a n00b field agent in the temptation service. Screwtape, the author of the letters, offer various advice on how Wormwood, the nephew, should proceed to better tempt the young British man of the World War II era into going to hell. Spoiler alert: It’s not Hitler or anything. Most of the temptations are not those to great crimes but rather to misdemeanors of self-centeredness, self-aggrandizement, and disbelief.

The essays are chock full of good insight into the foibles of human nature, the lies we tell ourselves, and how we relate to one another, particularly the danger of factions in churches and in superiority derived from beliefs (even amongst Christians). The book also explicitly states that congregational churches lend themselves to this easier than parochial churches and why this is more appealing to casual, unreflective believers. Its something that follows, but something I hadn’t thought much about.

The second part of the book, “Screwtape Proposes A Toast”, covers the way modernism and modern education erode the structure of morality and civilization. Given that the book is fifty years old, Lewis saw some of the effects of then-new and partially obscured trends and drives and how they would play out in the future. And so they have. Sadly.

At any rate, even if you’re not a Christian, you can certainly unmask or be reminded of some bad habits you might engage in or some elevated thinking you should probably rein in. At only 172 pages, it’s a pretty easy, engageable read and worth your time.