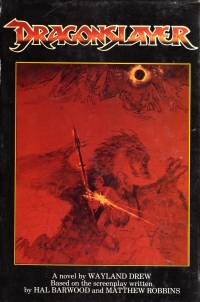 This book is the novelization of the 1981 film of the same name. In it, an unauthorized party from a land benighted by a dragon comes to the last remaining sorceror for help. Every six months, the kingdom sacrifices a young woman to the old dragon to keep it from rampaging. At the sorceror’s tower, though, a military group from the kingdom catch up with the unauthorized group and kill the sorceror. The sorceror’s apprentice and undertake the journey and catch up with the aid-seekers in their retreat.

And then go on to fight the dragon and win, eventually, of course.

The book has an interesting element in it: the rise of Christianity in Europe replacing the old magic systems. The book takes place in an unidentified region in Europe at the rise of European civilization, and the town nearest the dragon’s lair has a new Christian missionary in town who converts people as the dragon’s menace continues. The sorceror’s apprentice doesn’t decide to go onto becoming a sorceror–after the death of his master, there’s no one to teach him and he prefers the world rather than the books–so the book muses on the transition between the old ways and the new. It’s a pretty even-handed treatment of it; in the 21st century, there’d be a lot more handwringing about the loss of magic for the fairy tale lies of the church than you get from a book based on a film in 1981.

It’s a good enough read, once it gets going. It’s a slow starter, and of all genres in the world, fantasy is the one whose audience will allow slow, wordy starts. Which this one has.