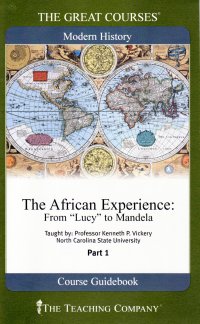 To be honest, I’ve struggled a bit with writing the summation of this course, or at least what I learned about it, because it’s Africa, which is where [Some] black people come from. I say “Some” because Australian aborigines are dark skinned to the point they might be considered black and not merely southwest Asian brown and because Americans who are black can come from Australia, Africa, the Caribbean, America, or anywhere else. What a freaking loaded topic this is.

So anything disparaging or dismissive I might say about this course, African history, or anything else will undoubtedly mark me as a Racist. Although, to be honest, the fact that I grew up a minority in the housing projects of Milwaukee or the fact that I announced to a comely young lady who would later discover that she was an Indigo child as we left a mandatory university diversity thing that I was 21 the first time I could claim my best friend was white (Mike) does not factor in my Racism. Only the 21st century definitions and sensibilities will do.

Now that we’re all comfortable with that, understand some things I will say about sub-Saharan African history might be taken as disparaging or dismissive; however, that is not a factor of Race. It’s more a factor of history. Well, written history. Which is what we mean by history, ainna?

Well, I learned a lot from this course, certainly. I’ll be honest, I didn’t know much about sub-Saharan African history. I knew a bit about Egypt and Carthage, and I have seen Casablanca and know something of Algiers from reading Camus. But those are Mediterranean Africa. I am familiar with the more recent “history” from South Africa, Zimbabwe, and Rwanda that happened in my lifetime. The course taught me a bit about the topography of Africa, its climate, and its diminished soils which certainly challenged the rise of civilization.

Sub-Saharan Africa was mostly prehistoric before the arrival of the Europeans and Arabic traders and colonizers in the middle of the second millennium. Prehistoric, of course, means no written history, and there really wasn’t. A couple sets of ruins, evidence of a couple of great kingdoms, but no long-running narrative until others came to write things down.

However, I’m a bit skeptical of the history of Africa as presented by modern historians as the “beginning” of the real history coincides with the colonial period which is by the default modern narrative evil, and the Golden Age of modern Africa falls in the mid-to-late 20th century when African countries gained independence through colonial powers letting them go or through bloody wars with settlers who had moved to Africa permanently. Which coincides with the 1960s, when modern historians were coming up through the schools, so the scintillating taste of revolution/freedom zeitgeist of their youth might be bound up in the student movements in Africa at the same time that really did lead to overthrowing the Man.

The series is called The African Experience, after all, which tips that maybe it’s more than mere history. The lectures include:

As I mentioned, the series really balloons when we get to the introduction of the explorers and the colonizers–you have six summary lectures on topics, you have a couple “ancient” history lectures, a single lecture on the Swahili commercial world, which involved colonization by Arabic peoples and a slave trade of its own, but we then get two lectures on the Atlantic slave trade and a pile of story of the European colonization of Africa, followed by a handful of lectures on the various nations breaking with the colonial powers and how awesome that was, but with acknowledgement that some of these nations returned to strongman rule at various times. We also get lectures about the Rwandan genocide in 1994, how Zimbabwe started to turn out, and the prevalence of HIV/AIDS and a bit of why (because it got a good head start before it came to the West’s attention in the 1980s).

So the experience of the African experience has some good information in it, but a lot of contemporary flavoring. The “history” here is too much current events to be comfortable of the interpretations and meanings derived from the events. The author tips his hand to some beliefs when he calls Martin Friedman “far-right” and mentions, but glosses over, “freedom fighters” who targeted shopping districts–some less sympathetic chroniclers might call that terrorism. Time will tell if de-colonization was actually a good thing for residents of the varied and artificial African countries or whether they just exchanged one set of distant rulers for a closer set of oppressive rulers. This fifteen year old take does not.

So a lot of good information if you approach it with a bit of skepticism. Which, to be honest, is a good way to approach any contemporary or historical account of anything.

Well, there now, was that Racist at all? It’s so very hard to tell. I certainly wouldn’t be able to gauge it myself; I would need an official arbiter from the diversity industry to say that it was. But I can assume.