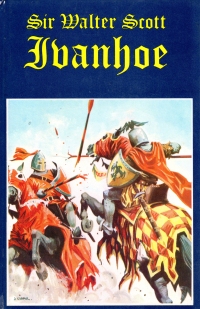 I remember this book being mentioned explicitly (well, not that explicitly) in George Carlin’s comedy routine in his album What Am I Doing In New Jersey?. The bit is the driver behind him has his high beams on, and Carlin says that’s great because he just happens to have his copy of this book with him. At any rate, it’s taken me a long time since listening to that bit over and over on my monthly trips back from Missouri to Milwaukee right after I graduated the university, but I finally read this book (although, in my defense, I only got it last year).

The book is the story of a son of one of the few remaining Saxons in post-Norman Conquest England returning home from the Crusades. His father has disinherited him for supporting the Norman king (Richard II). He helps a Jewish moneylender and merchant and, as a reward, gets armor and a horse so he can enter a tournament, wherein he beats the best of the Normans along with the Black Knight. A Templar is smitten with the daughter of the money lender, and…. Well, there are some nefarious plots afoot, and it involves Prince John and Richard II. Of course, if the story takes place during the time of Robin Hood, one expects Robin Hood to appear. So he does, but he remains a secondary figure.

As I was reading, I confused Sir Walter Scott with Sir Walter Raleigh, so I thought the book was written 200 years before it was; as such, I was very impressed with the treatment of the Jews within the text. Although the characters curse the Jews, they’re treated well by others and are not the villains of the piece; the Normans and some of the clergy are. A bit of post-reading research (I read the Wikipedia entry) put the book in its proper historical context.

Still, in the 21st century, I can see collegiate English papers beginning with the thesis that the book is anti-Semitic (at least until the researcher gets to the Wikipedia entry). Or maybe not.

At any rate, it’s not a bad read. It’s in relatively modern English, although the style is a little more florid than modern readers expect (see also Frankenstein). However, it’s still only 212 pages. How do modern thrillers get three times that large without florid prose? I’d tell you, but I don’t read much modern stuff.

And the edition: This is a 1982 Legendary Classics edition, which means someone grabbed the public domain copy, introduced a couple of typos to protect their copyright, and printed this cheaply. The book identifies a number of others in the series (of which I’ve read only a few). But this edition is blessedly free of introductory essays explaining what you’re about to read (and throwing in spoilers) before you get to the actual novel. My goodness, the middle-of-the-twentieth-century editions of classics are worth more than the modern Penguin editions just for the freedom from interruption and pretension of telling you what you should think about what you haven’t even read yet.

So if medieval romances are your thing, this might be the book for you. I certainly recommend the edition.