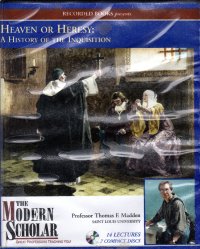 This course extends the lecture on the Inquisition from Medieval Mysteries and gives a fairly detailed history of the Inquisitions starting with the fact that the although the common 20th and 21st century representations of “the Inquisition” were oversimplified, incomplete, and based on popular culture not only of the current time but also the past centuries.

Well, okay, he starts with part of that and ends with a couple of lectures about how the various Inquisition was eventually portrayed after the Enlightenment as brutal and backward.

But in between, the ten or so lectures between introduction and conclusion, provide good historical context for the differences between the inquisitions in various regions and the modern, post-Enlightenment propoganda and popular culture interpretation of the Inquistion.

He lays out the contemporary zeitgeist–that it was a more uniform religious time, when crop failures and whatnot were still interpreted as God’s displeasure with a people as in the Old Testament. So the people wanted someone to come root out the heretics who were displeasing to God, and how the local rulers liked to take this upon themselves to find and quickly eliminate troublemakers in the area–often not so much theological disbelievers as political malcontents. So the local church leaders could call for an inquiry, which sought to find disbelievers and to convince them to return to the faith. Use of torture was limited, and the hearings had strict rules of evidence for the most part, and have some number of records in the church archives to support this. Only after a long inquisition and failure to recant was a presumed heretic released to the secular authorities for execution.

However, it did evolve, and by the time of the Spanish Inquisition, some of these rules were loosened. The ecclesiastical inquisition was co-opted by the Spanish government, so it was a little more brutal than other inquisitions.

Inquisitions, as they were, continued into the time of the Reformation where both Protestants and Catholics used them to ferret out the heretics–which were essentially the other side of that particular schism. Eventually, though, when the religious wars burned out, the inquisitions did, too, although the Spanish Inquisition formally continued into the nineteenth century.

When the Enlightenment authors got going, though, the Inquisitors were always the bad guys, and the then they were comic relief.

So the course adds detail to the one lecture he gave in the more summary course noted above, but I’m not sure I’m going to retain much from the extra material, and I’m not driven to a medeival studies degree with an emphasis in the material. But it did pass the time in the car and gave me a better time than the limited playlists on the radio.

And I’m thinking about writing historical fantasy with an Inquisitor as a protagonist. But Howard has almost done that with his Puritan Solomon Kane better than I would.