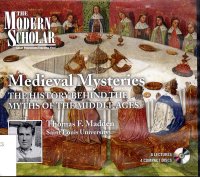 This is a short course from the Modern Scholar series that focuses on myths and stories from the Middle Ages and how true they are. The four discs / eight lectures cover:

Not to spoil it, but basically, it boils down to there might have been a kernel of a real person for King Arthur and Robin Hood, but the stories have outrun the truth (print the legend!). A number of stories (Pope Joan, Inquisitors, the Droit du Seigneur, Flat Earth) were invented after the fact to reflect poorly on the past. As to the Shroud of Turin, who knows?

The author goes back to original sources and earliest mentions to try to get to the germ of each, and he does a pretty good job at a high, summary level or presenting the material. I enjoyed it, and it was only four hours which meant I could finish it on the recent drive up north.