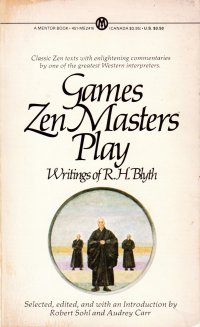 This book collects some commentary on primary Buddhist texts by an early 20th century Nipponphile. R.H. Blyth was born in London and moved to Japan prior to World War II. He was locked up for the duration of it, but continued to live in Japan afterwords. He became quite the scholar in Buddhism and whatnot.

The book takes an excerpt from some Buddhist text, whether it’s a poem or a complete parable, and Blyth comments on it, making it more palatable or comprehensible to Western readers. He ties some of the tenets and lessons to Christian teachings to illustrate how some of the concepts align, but dealing with the primary sources really highlights some of the ways the ontology of Buddhism is a little hard to swallow at times.

You know, I might have said this before, but the Buddhism and Yoga purists rail against lightweight Mindfullness industry even though the authors and speakers who talk about embracing and focusing on the present instead of embracing the Eastern religion in toto might be distilling the best part of the religions kind of like non-denominational churches focusing on the gospel instead of the law. These provide practical blueprints for living, and we Americans are practical people in the aggregate. After all, we invented Pragmatism, did we not?

Or maybe I’m just making this all up. I don’t know if I’m really clever or really daft. Or if these are mutually exclusive.