As I mentioned, I went to the Friends of the Springfield-Greene County book sale this weekend. Generally, this sale is semi-annual; however, with the Current Unpleasantness, the spring sale was cancelled. I had not realized how much I missed being able to go buy a stack of books and records cheaply.

I brought my boys along, again. They love to read, but the youngest must get overwhelmed with the selection, as he does not like to look for books that he might want to read. He gets very impatient and will badger me about being done very early; to be honest, he only comes because we have a new family tradition of stopping at Five Guys for lunch after. That, in his mind, is the purpose of the trip. Not accumulating vast reserves of books that might well go unread when one’s retirement ends.

So to minimize his boredom, I really only hit four areas:

We were in an out in an hour, a new record (actually, 48 since I failed to look at the Better Books records. 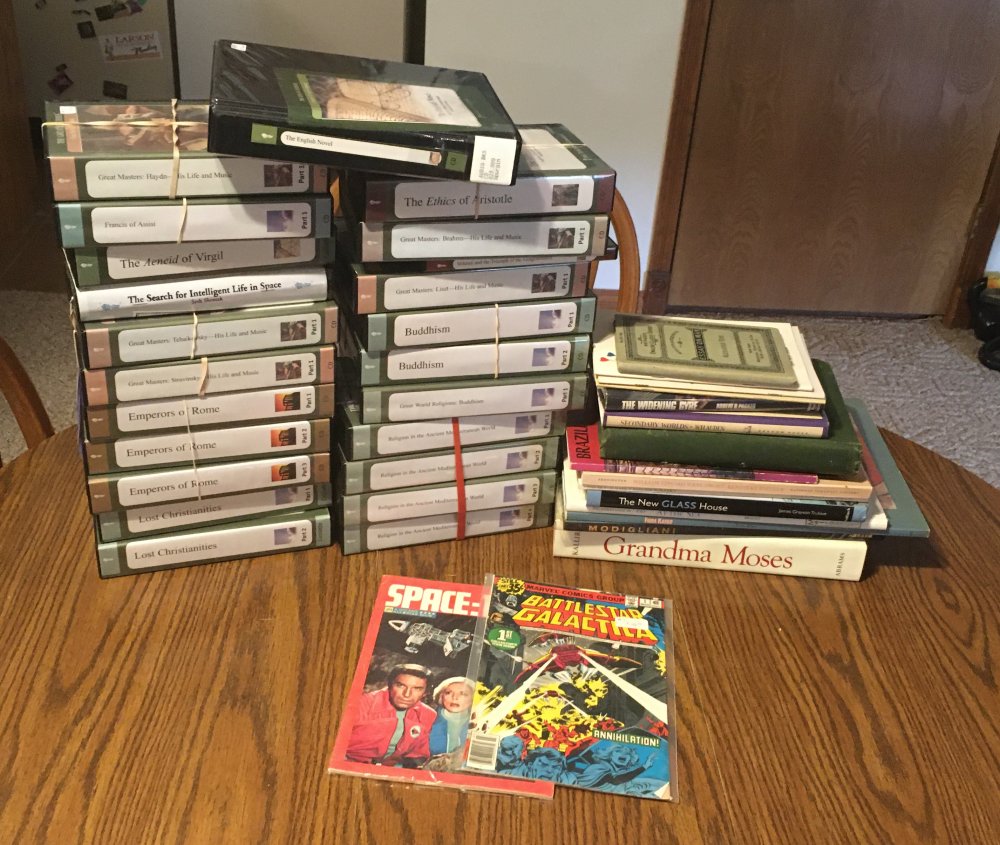 I got the following books:

I had worried about running out of CD-based Great Courses for the car (I have a bunch of DVD-based courses, but I don’t want to play videos in the car). Well, I quelled that worry. I found a couple of courses on audiocassette–my newer older car actually has a working tape player, so I can work with that–and most of what the Friends had in the Great Courses section, at least what remained on Saturday, was CDs.

That should hold me for a while. I might have to think of some additional reasons for road trips so I can have some uninterrupted listening time.

I also got two comic books: Marvel’s Battlestar Galactica #1 because when I went to the comic convention in 2016, I got numbers 2-22 and wanted to fill out my run. I also got an issue of Space: 1999 because I already had one comic–why not others? I left the rest of the nearly contiguous Battlestar Galactica issues because I already have them. They’re probably on their way to be ground up to cat litter even now.

As far as books go, that’s remarkable restraint. I will probably read the art and poetry books before the end of the football season. So I have not gotten myself too much deeper into the hole as far as books I will never have time to read goes.

I did spend over $100, though, mostly on the weight of the old books and the Great Courses. But the Friends could use the funding since the number of book sales has been cut in half and this one might have had diminished attendance because.

Which reminds me: I haven’t been to ABC Books in months.