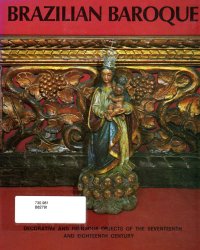 I bought this picture book last weekend and thumbed through it during a football game. It’s the takeaway book from a Washington, D.C., exhibit of Brazilian religious artifacts sponsored/provided by a government ministry of Brazil from the time I was born.

The preface and the introductory essay “Colonial Religious Art in Brazil” describe the development of religious art in Brazil (wait, you mean the title already summed that up?) from the items they brought from Portugal to the different regional styles driven by the materials at hand. To be honest, without a map of Brazil handy, a lot of this information rolled right over me as it’s pretty comprehensive in identifying individual religious institutions, the churches, convents, abbeys, and whatnot, that originally displayed the items and when they were built, burned, and/or rebuilt. The detail was a bit much for any sort of retention, and it certainly hasn’t driven me into further study.

The book also lists, I suspect, all the items at the exhibit whereas the book itself focuses on silver and precious metal-based church service pieces with a couple of other statues and monstraces thrown in. So although a number of terra cotta and soapstone statues are listed in the catalog, they are not in the book. Which is a pity; I think I would have prefered to see them rather than another censer.

Okay, I say it hasn’t driven me to further study, but I am not as familiar with the history of South America, especially Brazil, as I could be. So maybe I’ll pick up something on it sooner rather than later. I have a really dry history of Latin America that I tried to read twenty-some years ago. Maybe I’ll pick that up again. Maybe after I read The Story of Civilization.