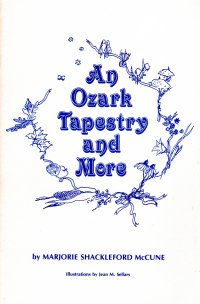 This is the second of the chapbooks that I bought this weekend; Heartstrings was the first. This is also an example of grandmother poetry, literally, as the back cover has a picture of the author with her grandson. The About the Author bit on the back cover mentions she took a class in writing poetry at Drury University late in life.

Which probably explains why this is a cut above the norm for the genre (which I am probably the one who coined the term grandmother poetry, but I think you will agree it is a genre in itself).

The poems cover the usual genre territory: Family, faith, and the seasons. However, under the influence of the poetry class undoubtedly, Ms. McCune has some poems with a pat abab rhyme scheme, but she dabbles with some other rhyme schemes and even free verse which really frees her from the constraint of the rhyme scheme for better rhythm and imagery. So some of the poems are all right (he said, in Northerner, which tends to dim compliments and to praise with faint praise, or so I tell my beautiful wife when she’s miffed that I say that her dinner was all right).

Apparently, a lot of the books I got this weekend come from the middle to late 1980s, and as I look upon this, which is a chapbook that appeared only a few years before my first, I’m a little–disoriented. I mean, the woman who wrote with this fresh voice was 80 in 1987. She has passed away long ago, and her book is 33 years old. Which means my first published book is 26 (but still remains fresh and is reprinted in its entirety in Coffee House Memories). Which means I am… getting old enough to write grandfather poetry although my grandfathering years are still at least, um, not that many years in the future maybe.