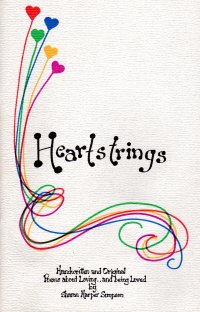 As you might have expected, gentle reader, I dove right into the chapbooks and art monographs during the second week of football. As I watched most of three games, I had plenty of time in between plays to read a poem or look at a picture and caption. Given how my attention during football games these days focuses mostly on the books and a little on the football game makes me think that maybe watching football is more of an excuse to read during the day than actual love of football.

At any rate, this is a middle 1990s chapbook back when making a chapbook often meant laying the stuff out yourself on paper. Desktop publishng was very rudimentary then, gentle reader–take if from someone who printed the text of his first 1994 chapbook out and laid the actual pages out on paper and whose first issues of his magazine (the St. Louis Artesian) were laid out on paper until I got Microsoft Publisher on a 386 PC in 1995 for later issues and my second chapbook. Oh, there were small publishing houses that did chapbooks back in that age, but most of us just ran them off at Kinko’s.

The most interesting bit about this book is that it was hand-lettered in a fun, almost italics font that took a lot of work. Here’s the dedication page: 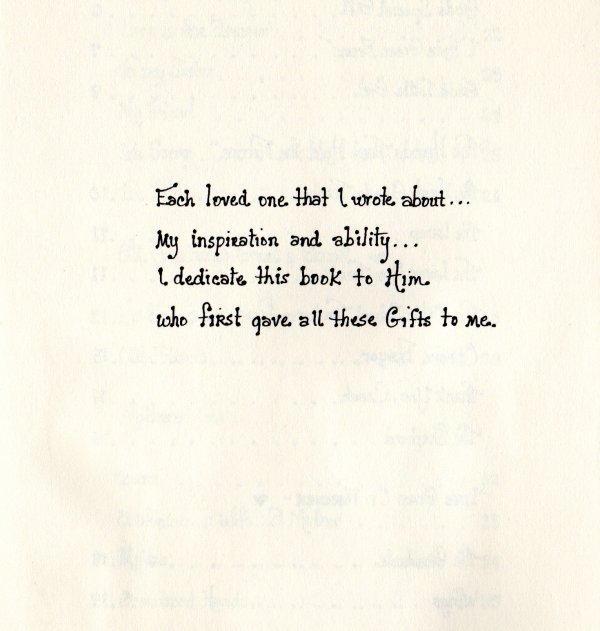 I have trouble making my handwriting legible much less pretty.

However pretty it is, though, it makes for a slower read over the length of a book, even a chapbook like this. I’m currently working on a longer book, a Yoga devotional, presented in an italic font, and it’s not fun going through 300 pages of it. This book, though, is only 53 pages.

The poetry is pretty pedestrian Grandmother poetry talking about family and faith with end rhymes and a bit of a sense of rhythm. So, yeah, nothing that sticks out–but I’m reading the complete works of Keats, and most of Keats’ work doesn’t stick out, either. So take of that what you will: Good poetry, or a good poem, one that strikes a chord within you, is pretty rare.