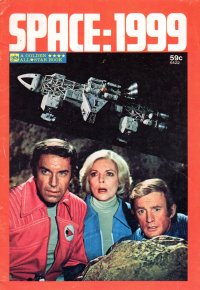 When I bought this book last Saturday, I thought it was a comic book; however, it turns out this is actually a children’s book. So although I do not count comic books in the annual total of books read–so the first issue of Battlestar Galactica that I bought on Saturday doesn’t count (but the first of the novels, which I read in 2011, did). Don’t bother trying to make sense of it–the rules of what I count as a book for my annual reading total based on content, length, and time of year are very difficult calculus indeed.

At any rate, this book includes two short adventures of the crew of Moonbase Alpha. In the first, a colleague thought dead returns but is actually only a cipher for a ruler from the planet Psychon come back to get revenge on Maya, the woman with the sideburns who can change into things. In the second, explorers in one of the ships find a planet suitable for colonization with a small group of mentally advanced people on it who will share their planet. But there’s a dark secret: The planet has no sun, and it’s only the mental power of the Queen that keeps it going–and she steals power from the brains of her subjects.

I remember the program came on on Saturday afternoons in the late 1970s in Milwaukee, but I don’t remember watching it much. All I remember is the woman with the sideburns could change into things. And that it had a low budget, but somehow it didn’t grab one as Star Trek did. And by “one,” I mean sub-ten-year-old me. So I have to wonder if this is worth watching sometime. I just checked on Amazon, and it doesn’t look like it’s available in US DVDs. Which makes my mind up for me. I don’t have time to watch the things I own, so I shouldn’t go buying things I will just put in the cabinet for some day. Also note: It’s far easier to be virtuous for sins one cannot commit; if Amazon had the complete series on DVD for $14, it would be on its way to Nogglestead by now.