Now that my oldest child is in high school, which officially makes me as old as my peers (well, not quite–some of my peers are grandparents, but old enough anyway), we have found ourselves at small town high school football games on Friday nights. 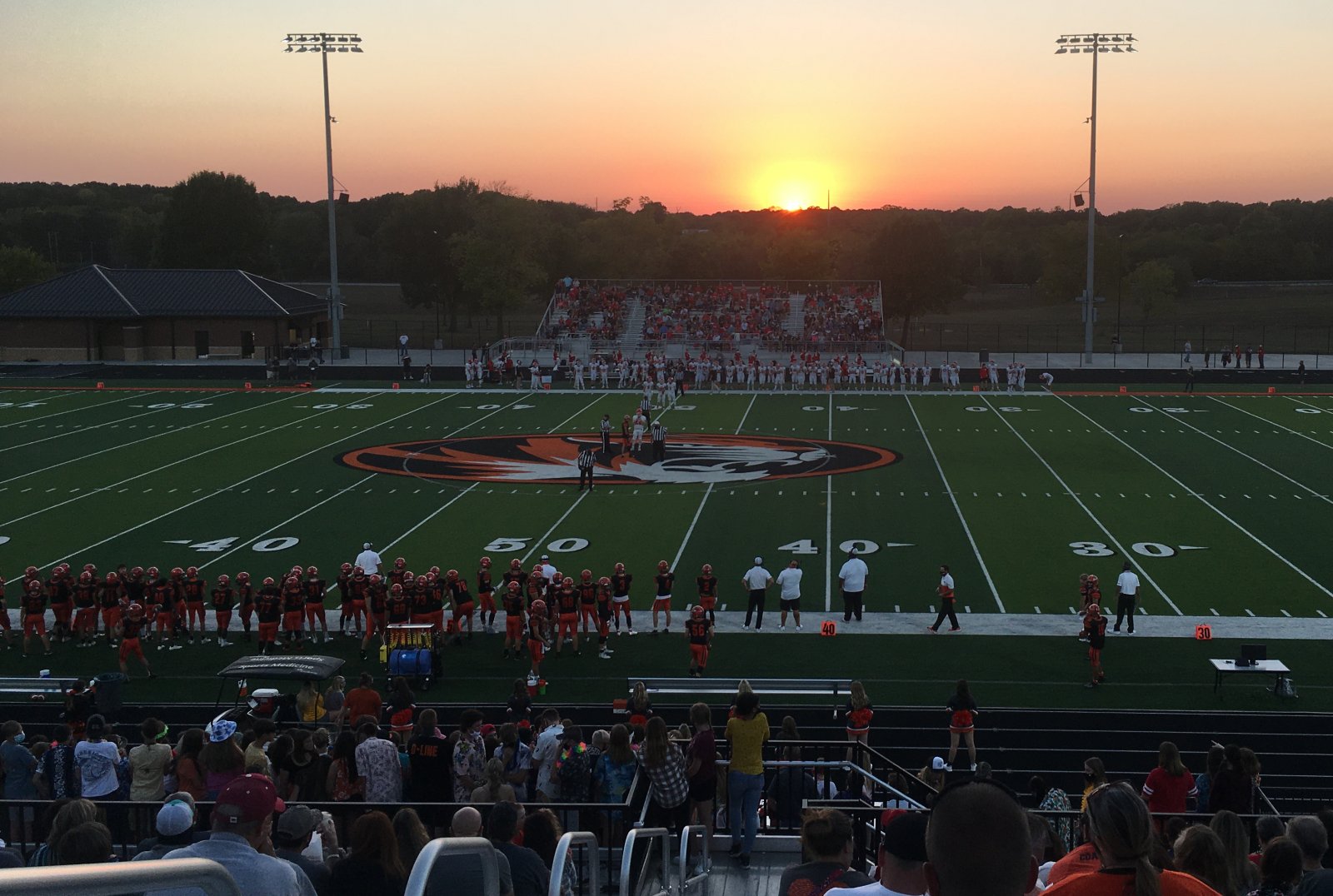 You know, I went to a similar high school. Well, almost. My son’s high school covers the small town, which is partly a bedroom community for commuters to Springfield and partly ranches with a little in-town people. My high school was mostly the children of commuters as there wasn’t a lot of actual agriculture or ranching in northwestern Jefferson County that I’m aware of.

I never went to a varsity high school game when I was in high school, but I did inadvertently sneak into a freshmen or J.V. game once. My mother had a meeting at school, probably for the Optimist Club scholarship, as that was the only organization she was involved with and not the school itself, and I went along or waited after school with her instead of taking the bus home. I didn’t sit in on the meeting; instead, I wandered around the school campus as the night fell. The bleachers were full for the football game, so I wandered over for a bit. I didn’t know football in high school, so I had no idea what was happening on the field, and I didn’t have many friends, and none were in the stands, so I wandered out. When I wandered back in, the school security officer stopped me and told me it cost like $2 to get in, which I didn’t have, so I wandered off. Thus ends the story of all the high school sports I watched when I was in high school.

So this is a new experience for me.

I’ve learned the difference between cheerleaders, poms, and the color guard. When I was in high school, I knew the girls could join one of the three, but I didn’t know what each did (and in my high school, it was and probably still is all girls–although Mike made a splash when he joined the squad). In case you’re not clear: the cheerleaders lead chants and are the ones that make human pyramids; the poms do dance routines to music; and the color guard twirl fake guns and wave flags during marching band performances.

The local football team is now 2-3. In the first game we watched, they ran over another local team, another of the many Tigers squads in southwest Missouri (all named after the Mizzou team, I presume, as tigers are not indigenous to the area). The second, they lost badly to a small town squad that somehow always wins the state championship for the division. This weekend, they went down pretty big to another local Tigers rival and almost came back but for a costly penalty. I am not sure my high school was ever that good.

We run into people we know at the game, which is nice–it makes us feel like we’re part of the community a bit, which is hard at times since we both work from home, although my beautiful wife has been attending networking events and joining local boards over the last couple of years whilst I’ve toiled away in my home office. Several members of our church live in the small town, and some of the students that have matriculated from the K-8 Lutheran school have gone onto this high school. That means our son, although he did not come up through the local school system, knows at least a few kids before starting his high school career, and we know the parents enough to say Hihowareyou.

As I attend the events, though, I sometimes imagine what it must be like to experience it as a high school student.

I can almost capture the flavor of the sensations from the few similar things I did as a youth–the familiarity, the friends everywhere, the feeling like this is your school. But it’s a distant imagined flavor, thinner than the scent of sweet leafy decay on the autumn wind.

My boys are getting the full flavor of well-lived childhood with plenty of future vivid memories of their activities. My wife remembers many high school extracurricular activities fondly and remains friends, Facebookian anyway, with people from that era in her life. I, on the other hand, spent a lot of time down an old gravel road with just my brother and my Commodore 128. The evenings, and the weekends, and the summers are just a blended and blurred pointillist pastel of listening to the radio, reading detective fiction, and typing magazine computer programs into the computer. When my boys want to spend all their days with their faces pressed up to the Internet windows of their electronic devices, I direct them, vehemently, to live instead (to mixed results). I would rather they have memories like their mother’s rather than the almost-memories of their father.

As I watch the sun set over the autumn-burnished trees, I can’t help think that I’m entering the autumn of parenting. We have had children in the home for almost fifteen years now, and within an imaginable number of years, they will be out in the world and my daily oversight of and interaction with them will be over. I’m already anticipating a bit of temporal agoraphobia–what do I do with all this free time?

1 thought on “Tigers At Sunset”