Yesterday afternoon was glorious. Warm; the temperature topped out at a golden 80 degrees. I finished my work day, and as I had calls until past time to pick the youngest up for school, we could not do our early martial arts class. I had the choice of noodling on my computer until dinner time, which I too often accept as the default, but my boys were also about to default to their choices of spending time on their devices. We told them to go outside, to shoot some hoops or to throw around the football a bit, but they were, erm, reluctant to do so until I divested them of said devices. Even then they only went to the garage to consume an illicit snack of chocolate chips.

So I decided it would be a good time to Make Memories by joining the boys for a little game of catch. Which made a memory, all right.

My oldest boy played recess football with a number of friends in elementary school and middle school, but nothing organized, and certainly not enough for the high school football team. The youngest, though, has gotten a real interest in being a football player since we started attending high school games, so he’s wanted to throw the football around a bit this year.

We have done so a couple of times. I was surprised to see how well they throw the ball. Me, I was out of practice–aside from noodling around with a football a couple years back when the boys were really young, I haven’t thrown a football since I was a kid. So I started throwing it like it was a baseball with limited effectiveness. I was getting dialed in, though, getting more of an arc on it and putting it within catchable radius of my boys.

Which is a new way of throwing for me, really. In the past, when they were younger, I learned to throw off to the side just a step so the child could get in the way of the ball, but if they missed it, it would not hurt them or make them cry. I know, that makes me a bad dad raising snowflakes. But that’s how I did it the few times we played catch in the past.

They don’t move much to catch, though. Whereas I wait on the balls of my feet to break on the ball and try to catch anything near me, they have a tendency to kick at balls that would require them to take a step or two in any direction. Perhaps an unwritten rule of catch is that you shouldn’t have to move at all to catch it. I have no idea. I am pretty sure I never played catch with my father. At any rate, their lack of lateral movement emphasizes that I cannot drop a football on the numbers at twenty yards 100% of the time, which sullies the image of their father who can do anything well. Which is probably an illusion I only hold now that they’re older. But, still.

So yesterday was a glorious afternoon, and I thought we could throw the football for a half hour or so. The oldest boy joined us, and we passed around in a triangle fashion, warming up with ten yard or so throws. I was working up a good winded chasing throws from my youngest.

I had just thought about how lucky I was to not be getting my fingers jammed like the youngest did the first time we played catch this year when, inevitably, I took a throw directly to the left pinky.

It hurt, and I shook it, and as we started to walk to the house–I was done for the day, and they were probably happy to go back to their unreal electronic world–I palpated the finger a bit, and thought, “Uh oh.”

It wasn’t right; the knuckles weren’t just swollen from being jammed. It felt like the bones were not aligned properly. I could not bend it a all.

So what does a man do in this situation? I thought about splinting or buddying it to see if it corrected itself overnight. I thought about trying to pull the finger into proper alignment myself. And then I consulted with my beautiful wife, whose heart was warmed briefly to watch the boys playing together outside, that we should go to the urgent care facility.

The diagnosis after a couple of x-rays. Dislocation at two of the three joints and a small fracture. 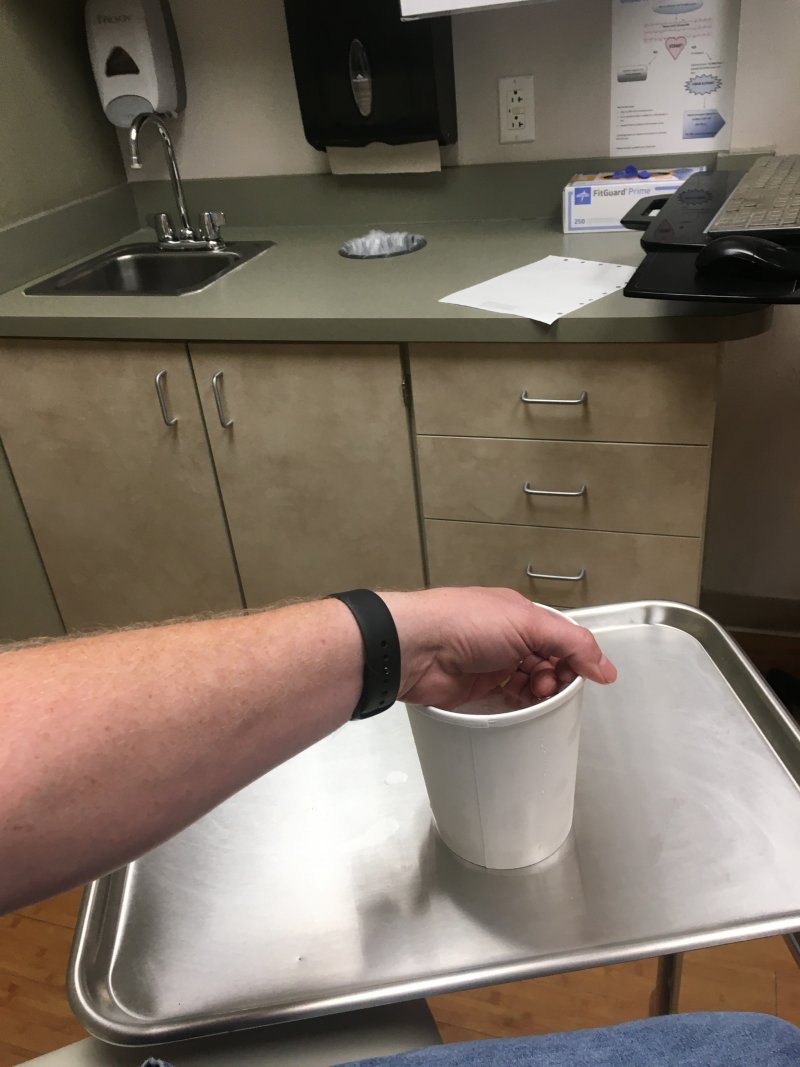 The treatment: Well, you can numb your finger in a “bucket” of water (above) or you can take a more expensive shot, and then the nurse practitioner will pull your finger to pop the bones back into line. I opted for the ice.

I put my whole hand in to start, but after a couple minutes of me simpering, embarrassingly, before my wife about how I could feel the pain up to my elbow, I found a way to tip only the last finger into the water (above). They let me soak it for about thirty minutes before the NP came in. She popped the smaller bone in place fairly easily, but she had trouble with the second, so she brought in someone to help, and one of them pulled my hand in one direction and the other pulled my finger a couple of times until it popped back into place fully.

So here I am, splinted up and learning to do things with one and a half hands for a week or two. They mentioned that tendon damage might lead to further dislocations or that I might need physical therapy, but I was able to make a pretty tight fist (but for a little swelling on that finger), so I should be able to return to martial arts. But I might have to be very careful when breaking boards with that hand in the future.

Meanwhile, my youngest has expressed great sorrow over what he has done, but I told him I hope he brags about how hard he can throw. I mean, I would say someday we will laugh about this, but I am already laughing. I joked with the nurse practitioner and all the staff yesterday even as they were relocating my digit. So I am in good spirits. Better, now, actually, as recounting this story has revealed how little this has impacted my typing–I am not a touch typist, after all, so I am not having any trouble typing A as needed.