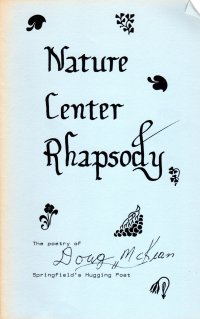 As you might know, gentle reader, I sometimes take my children to the Nature Center here in Springfield, so I’m familiar with some of the locations mentioned in the book. And, in a Springfieldian turn of events, my beautiful wife nows the author: his wife taught algebra and his child played in the band with her. So I’d better not go too hard on the fellow as it might stifle our social life.

The book doesn’t have a date on it, but it’s right about in the 1985-1995 era. It uses a monospace font and lots of clip art which puts it in the early days of PC-based desktop publishing (as opposed to X-acto knives and rubber cement desktop publishing, both of which I participated in with my chapbooks).

At any rate, the first poems in the book made me think I’d picked up another winner. They feature, directly, locations at the Nature Center that I could visualize, probably helping because I’d been there, and the poems throughout the book are shot through with mindfulness/Buddhist themes of stillness and just being with the universe.

However, later poems get more to the modern short line stacks that I don’t like at all. It’s hard to evoke with three syllables–even haiku have five (in their first and last lines and seven in the middle line, I know, gentle reader). But the haiku is trying to make but a moment for contemplation and not a longer poem. I might have to work out a mathematical formula for the minimum number of syllables in a line of poetry before I disapprove. It might be seven. Maybe six. Maybe a more complex algorithm where an average line length over the poem matters more. I dunno. At any rate, the later poems led me to re-read the ones at the beginning and kind of discount them as well.

So it’s okay in spots and thin and tepid in others. Kind of like this blog, come to think of it.