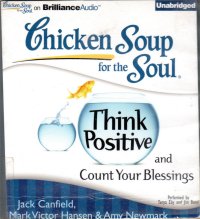 This audiobook is a collection of sort little essays about, well, counting your blessings and finding the bright side of things. It has eleven pieces by eleven authors. One of them is, literally, a woman who enumerates one hundred blessings, so it’s a couple minutes of sentence fragments.

A couple of them seem a little fictionalized. One features a woman coming to college in her forties who collects aluminum cans from the campus garbage for her daily bus fare and sometimes, on good days, her lunch. I look askew at this story, though, because I cannot remember a time when aluminum can prices were high enough that you could pay bus fare with a couple cans picked up. You’d have to fill a bag or so. Even the old automated machines that appeared briefly in grocery stores only gave a penny for two cans, and that was at the height of the market. Another deals with a snow storm where a woman breaks up furniture and keepsakes to burn them to keep warm, and how liberating that is. A lot of wood stuff, especially inexpensive stuff, is made with pine, and that would have been an unpleasant indoor fire indeed.

At any rate, it’s a little like the mindfulness that more la-de-dah people get from their Buddhist and Yoga texts. With a little uncluttering thrown in (ironically). It’s got a Christian bent, and the first three or four items featured divorced (and sometimes multiple divorces) people. I bet they needed some perking up.

Did it make me feel better? It’s not the sort of thing that changes your life in one listening. It’s the sort of thing you should probably steep yourself in to eventually, over the repetition, that can guide you to a better mind set. And it’s not an unpleasant hour or so of drive time.