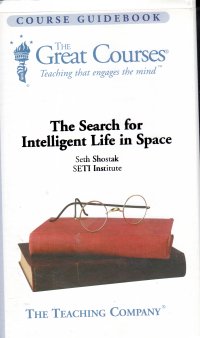 Okay, now this was a fun course to listen to. I was a little concerned that it might be a bit thin on topic matter, as the SETI program itself would be a rather narrow topic–merely talking about analyzing radio signals from space would make for a long six hours.

Instead, the course runs a complete gamut of cosmology, astronomy, history of astronomy, pop culture/science fiction, xenobiology, and more. Lectures include:

It’s all fascinating material–some of it scientific scientific, but much of it speculative scientific. The lecturer theorizes that conditions in the cosmos, or at least our galaxy, are such that they would resemble us a whole bunch. Some of the existing science, at least our understanding, would lead to this conclusion, but a lot of times, I’ve found that speculation (and politically charged science) tends to assume we have reached some sort of peak and that all things we learn from now on will confirm what we know now. Which is not very scientific at all. Also, I found a clear line in this course between science and speculation, but I find that a lot when I think about or read about (or hear about) science. The result you predict is speculation; the method to prove or disprove your speculation should be science.

I am nitpicking a bit here–it’s a fun run through these topics, and the lecturer has a pleasant voice and a great sense of humor. The course is over twenty years old (and on audiocassettes, which meant it cost me fifty cents total in September–definitely worth it). Some of the things he thinks we’ll know in the next decade–including maybe finding a signal from a distant world–have not come to pass, but we did just scoop some asteroid material for a return to Earth.

Which is a good reminder of how slow space-sorts of science moves. This lecture series, at twenty years old, is mostly fresh and contemporary, and our asteroid-scooping spacecraft was launched four years ago and won’t return to Earth for three years. When I was young and into astronomy a bunch, those sorts of timelines seemed really long. Now that I am older and with a different perspective on the passage of time, I think three years is no time at all.

Also, the lectures, in the one or two lectures on the actual SETI program techniques, mentions the then-contemporary SETI@home project. Basically, in the era of dial-up, you could download an application that would process SETI data while your computer was inactive–it ran as a screen saver, and then every couple of days you could dial into the server and upload the results and download data to process. I had this on my home computer at the time, which stems from the days I lived in my apartment and right after I got married. Somewhere along the line, with some computer change or another, I stopped installing it. I see it’s been shut down now for a while, but, geez, this is an old course, and I am old since I remember some of it from my youth.