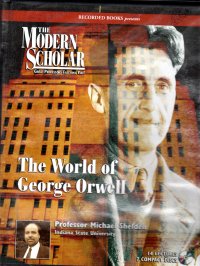 This audio course is entitled The World of George Orwell, and that describes the content of the course. It’s partly a biography, partly a history of the early part of the 20th century in which Orwell lived, and partly a discussion of his works. It’s a seven disc, 14 lecture set that culminates in discussion of Animal Farm and 1984.

It’s a Modern Scholar course, so it’s 2 lectures longer than a similar Teaching Company/Great Courses lecture series, and it’s slightly lower quality. The professor presenting has a more sonorous voice, a little less dynamic, and he repeats himself a lot–sometimes the same sentence, he says in a slightly different way twice in a row. Still, he’s a homer–he loves his subject and has enthusiasm for Orwell which serves to mitigate the delivery.

So, biographically, a sickly young man with an education above what his upbringing might have borne decides instead of the military to join the imperial police, and he gets stationed in Burma. After a couple years, he returns home after an illness and to the disappointment of his family. He decides to be a writer and starts to write. He serves and is grievously wounded in the Spanish Civil War. And he returns to the United Kingdom and writes a number of books that don’t really go anywhere. He struggles with his publisher, gets married and loses his wife, endures World War II, and then hits big with Animal Farm and 1984. And then he dies.

Somehow the lectures diminished Orwell, or at least my concept of him. He seems a shabby little socialist who punched above his weight with a couple of good essays and a couple of books that captured the anti-communist zeitgeist of the middle part of the twentieth century.