So I have quietly begun to accumulate Tommy Reynolds and his Orchestra (Your Band Of Tomorrow) records. And by that, I mean I have snapped up the inexpensive copies that I have found on eBay. I’ve got nine so far, including some that are not on his Discogs page.

That’s right, I have been watching for items on eBay, which is unlike me. Mainly, I like to get my records for a buck each at the book sales. But I am hunting down Tommy Reynolds stuff on eBay.

I even have a 16mm film reel of his song “Smiles”:

I mean, the video guy has it to make my own DVD copy of it. You see, in the middle 1940s, the Mills Novelty Company made Panoram machines that played short reels of film, generally musical numbers, and you could put your nickel in the Nickelodeon sorry, that’s a different thing entirely. You could put your money in and see a film performance of a song. Music videos before MTV, children. So I’ve got my own copy of a film I can’t watch natively, and I’m hoping to stumble across other Tommy Reynolds titles.

Why, Brian J., are you so into an obscure big band?

Because my Cousin Tat sang with that band. 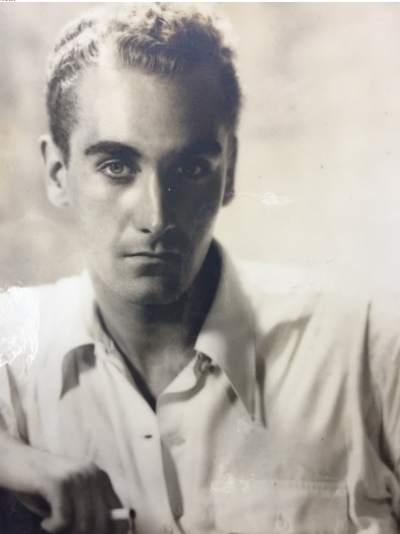 You might remember Cousin Tat as the doctor who did not know who Fred Thompson was. To be honest, at that time, that’s about all I knew about him, too: that he was a doctor, and that he could pray in Hebrew.

He passed away in late 2008, and it was only at his memorial service that I learned the measure of his legend.

He sang with the Tommy Reynolds Orchestra. He was an Anglican Bishop. He was the head of one of the Cherokee nations and visited 10 Downing Street. He was a medical doctor and professor who married an attractive, much younger student (my mother’s cousin, so Tat was really my cousin once removed by marriage). He owned a series of clinics abroad that specialized in nutrition and longevity treatments not approved by the FDA here in the states. And he was a nice man, a humble man.

Although the research I’ve seen on the Internet does not show any known recordings where he is credited with vocals, I’m grabbing up everything I can from the Tommy Reynolds Orchestra just in case I can find something with my cousin on it.