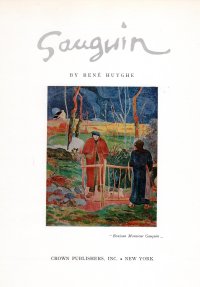 This book has not disuaded me from my thesis that art (not just visual art, but literature and music also) became generally broken sometime right before the turn of the twentieth century when the focus changed from the work of art representing something in real life to the work of art reflecting itself. That is, a painting wasn’t necessarily for you to look at the something in the painting, but rather for you to look at the painting.

Gauguin still stands on the representational end of he spectrum. You can tell his crude executions depict something, often nude native women, which means that he’s basically the artistic version of old National Geographic magazines. That is, an educated excuse to see boobs.

The book itself is laden with text with some boobs and some non-boob art interspersed. The text is heavily art-critic and translated from the original French, so it’s pretty florid and emphasizes how awesome and important Gauguin is, relating his work to other less consequential figures and the Impressionists. I am not cultivated enough to really grok it, though, since it’s the sort of in-language that detects hints of smoke and blackberries in the wine.

Something interesting about this book: the first couple of pages–the frontspiece and the title page have come out, and the title page has a picture pasted onto it. Which makes me believe that they were added after the rest of the book was bound. You know, one of the early work-at-home businesses was to paste these pictures into the box on the page and then ship them back off to the publisher to insert into the books. Work at home in your spare time while watching television ads in the backs of magazines. This girl I dated in the middle 1990s did that, pasted craft pictures onto the title page of some crafting book. It wasn’t that good of money, and you had to pay close attention to get the right amount of glue on the picture and to make sure it was square. Or the boss would reject the pages and maybe dock you for them. So the girl I dated didn’t do it for long.