Yesterday, on the way home from school, one of the young lads informed me we needed to go to the dollar store to pick up…. Something. It’s for his Learning Fair project, which is a paper, a trifold board, and a presentation that they (the boys) annually produce before spring break to show the grandparents (who have a special day at the school right before spring break).

He did not know to say “Report cover” and made it sound like he needed sheet protectors. But I remember from years past that they needed report covers.

“I think we have some of those at home,” I said. 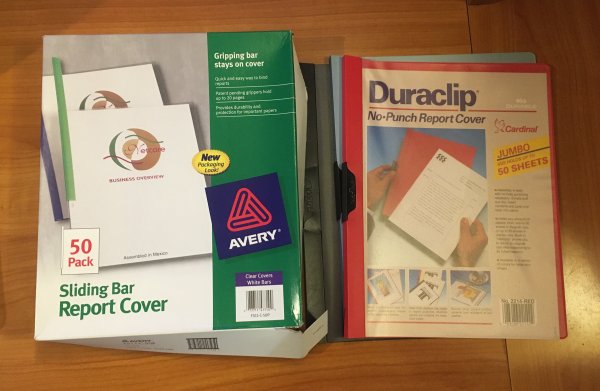 I am not entirely sure why I have dozens of report covers. Did I inherit them from my aunt? Were they on sale? Did I expect to write more reports than I have or expect my boys to need more than one a year?

Not depicted: Another package of six that wasn’t in the bin with the others.

So we didn’t need to stop to buy one (or fifty). And at the pace we’re using them, neither will our grandchildren or great-grandchildren.