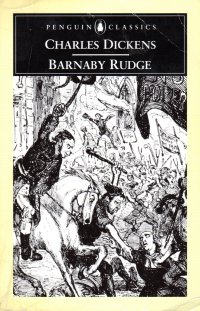 It took me several months to read this book, gentle reader. As you know, it takes a Dickens book several hundred pages to get going. In this case, I think it was 450 of the 750. So I have read many other books in the interim.

Apparently, it has been a while since the great Dickens Phase of 2007/2008 (where I read The Adventures of Oliver Twist, Great Expectations, Hard Times, and A Christmas Carol in a little over a year). So I picked this book up because I was doing well on my 2019 reading and thought I could fit in a longer work. Which took a while, as I mentioned.

At any rate, this book centers on the Gordon Riots of 1780 and numerous personages affected by it. We have an old inn keeper whose son joins the military to get out from his father’s dominion. We have two sets of star-crossed lovers: The son loves the daughter of a locksmith, and the niece from the large manor up the road loves the son of a tapped-out-but-keeping-up-appearances courtier who wants to marry his son to an heiress to get some cash. We have a twenty-three year old murder with attendent ghosts and secrets. We have the title character who is a simpleton a la Forrest Gump who falls in with a bad group leading the Gordon Riots. And, as I said, about 450 pages into the book, the riots erupt, homes burn, and people who deserve it live happily ever after and the wicked are punished after a fashion.

The book is rife with other characters who don’t contribute terribly to the overall plot–a lady’s maid who poorly serves her mistress, an apprentice locksmith who dreams of the locksmith’s daughter, a hangman leading the rioters who goes on and on about working ’em off and who you know will end like The Man Who Was Death.

So a bit longer than it should have been, but Dickens published it as a serial in his own magazine, so who was going to tell him to stay on point? You can pretty much tell when a serial section begins because the chapter begins with a lot of expository, “It was the best of times, it was the worst of times” verbiage that most of them lack. And were better for the lacking.

At any rate, like Hard Times, it’s not one of the more commonly known Dickens books and for good reason. Although in the 21st century, are many of them known at all?