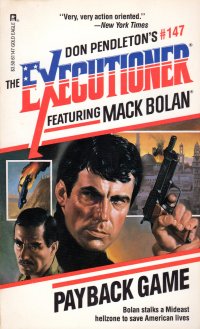 After Barnaby Rudge, I wanted a quick bit of pulp, so I turned to, once again, the next in my Executioner collection.

And stepped into a pretty pedestrian entry in the series.

In this book, Bolan goes to the Middle East to rescue some hostages being held by Hizbullah. The terrorists are led by a man who thinks he is Mohammed reborn and hopes that his plan of holding hostages will lead to world domination. He has set a deadline for capitulation, with a hostage being killed every week until his demands are met. So Bolan is on a deadline and has no real leads. So he goes to the Middle East, spares a highly trained warrior when Bolan is captured by a band of Yazidis and has to fight to the death to live. Turns out that this fellow is the twin of the lead terrorist, but he was raised apart and allies with Bolan. So they find the terrorist headquarters and bam bam bam!

Well, as I said, pretty pedestrian. I was impressed with a couple of Bolan books I’ve read recently (Blood Run, White Line War and Devil Force), but this book and the last one I read Direct Hit are reverting to the mean.

The biggest takeaway, though, is that almost thirty years later, I don’t need footnotes to know who Hizbullah and the Yazidis are. But for cell phones and GPS, you could drop most of the book into 2020 and it would not be too out of place.