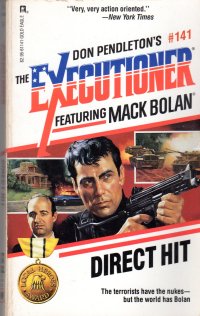 Welp, this is not one of the better entries in the series. The series by this point was progressing to more elaborate plots, and sometimes the authors handled them better (see White Line War and Devil Force).

This book, however, has the trappings of elaboration, such as continent-spanning set pieces and a bunch of interlocking conspiracies with different bad guys/terrorist organizations with their own competing and sometimes clashing agenda, but this author handles them a little clumsy compared to others. We don’t get much beyond the plotting part, with characters remaining thin and some of the plot movement is a little more than intertitle cards. So perhaps it reads a little like a silent movie version of an Executioner novel.

Still, I will continue with the series because some are better than others. Also, I stil have 24 of the numbered entries in the series and numerous spin-off titles, and they aren’t going to read themselves. Unlike the Little House books, though, I shall not finish them in 2020. But since the numbered series total is down to 24, I can almost see the end.

Oh, and one thing I flagged in this book is a little bit of big city rural miscalculation (such as was also seen in Death of a Hired Man).

She pointed the way, and he drove the battered pickup through Parkersburg, an unimpressive town of about forty thousand.

You know, forty thousand sounds small if you live in a major metropolitan area, but out here in the country, that’s pretty big. Springfield is bigger, of course, but Parkersburg is bigger than Nixa, Republic, Marshfield, and Monett. It’s almost as big as Joplin, and we kind of think of Joplin as a small city. After all, the Census Bureau says anything over 10,000 is an urban enclave.