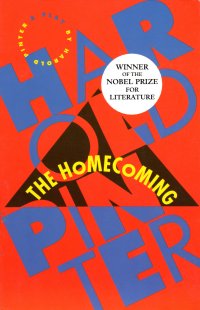 I got this book last week when I went to ABC Books for the Christmas gift cards. I did not do a full Good Book Hunting post on it because, gentle reader, I’m not sure if you even read them (or the blog book reports for that matter). But, if you’re interested, I got Little Town on the Prairie, Those Happy Golden Years, and The First Four Years in the Little House series, this book, and a book on whips and whipmaking that I bought for a gag gift for my brother but that I ultimately kept because, hey, I might want to make a whip some day.

At any rate, this is a mid-(twentieth)-century British two act play by Harold Pinter, who apparently won a Nobel Prize for Literature. Given the topic matter, I can see why.

The plot revolves around a house containing Max, the patriarch not respected by anyone and given to long stories extolling himself; his brother Sam, a chaffeur; his son Lenny, a pimp; and his other son Daryl Joey, a young man who wants to be a prize fighter. So they’re lower class grifters, basically. The oldest son, Teddy, a Doctor of Philosophy teaching in America, returns home as a surprise and brings his wife Ruth home.

So everyone propositions Ruth (as the back panel tells us), and the story alludes to the dead mother’s infidelity (as well as the male characters promiscuity and attempted promiscuity), and at the end, though frustrated with Ruth’s fidelity (or at least denying everyone in the household), they make plans to turn her into a prostitute and proposition her with the possibility, and she apparently agrees–leaving her husband to leave the house and return to America without her. At the end, she is the center of the household and the men revolve around her.

So I guess that’s the message: It’s unclear whether she will actually become a prostitute or just get all the sex she wants, but she will rule this household. At least, I think that’s what the message is. I suppose I could re-read it and highlight the bits that support my theory and turn it into a proper undergrad paper, but I’ve graduated, and I am reading for pleasure. So, nah.

The play did remind me of a play that I saw after college at St. Louis Community College-Meramac with a similar theme. I’ll have to go through my momentoes to see if I still have the program. It might even have been this play, but I am not sure. Funny, I haven’t thought of the play ever, and I remember most of the productions I’ve been to. Now I’ll have to dig those boxes out and see what it was.

But I’m not going to put Harold Pinter on my list of playwrights whose works I want to pick up. Unless they’re a buck at a book sale, perhaps.