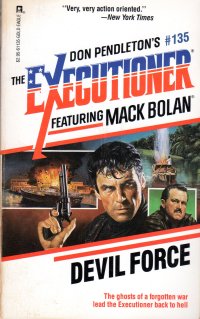 I was impressed (such as it is) with the previous entry in this series, White Line War, and I liked this book as well.

It doesn’t follow a typical Bolan/Executioner plot, which is nice. In this book, someone is hitting members of a covert ops team from Vietnam known for their savagery. The CIA starts trying to hit those members as well to cover their operations in the war, and members of the teams are looking to kill the person hunting them. Bolan is almost an afterthought as he tries to get to the bottom of it. It turns a convention on its head, as the American servicemembers are the bad guys and a Vietnamese youngster seeking revenge is, if not the good guy, at least a more sympathetic character.

Still, having Bolan kinda fumbling around the main plot instead of just hitting a Mob hard site was nice, but it does end rather abruptly with a quick battle in the jungles of Cambodia kinda truncated a pretty good story.

So I’m not averse to pulling down one of these from the shelf every hundred or so pages of the Dickens novel I’m currently reading at a leisurely pace.