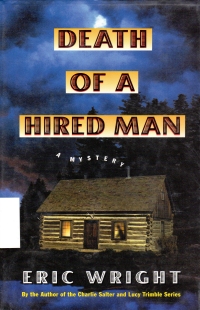 This book is a strange mixture of English cottage mystery and American police procedural. Which sort of makes sense, given that it is a Canadian mystery novel.

The plot revolves around a man found dead in the cabin of a retired Toronto detective. Is it someone who wanted the former hired man, a simple man who thought he was heir to his brother’s successful farm? Or was it someone looking for the detective for revenge?

This particular plot is spread among a couple of subplots, including a convoluted story about the detective’s allegedly illegitimate son coming from England to meet his ‘father’–convoluting the story and warranting the quotation marks is the fact that the detective, as a young man in World War II, claimed to have impregnated the English girl to take the fall as the bad guy who returned to Canada and did not cause trouble for the actual father, a man of some repute in the town. So when the not-really grand daughter visited Canada and her grandfather for a couple weeks, he enjoyed having her around. Now, he’s got to wonder whether he should come clean with anyone, including his new wife.

As a newlywed in his sixties, the detective and his wife have to deal with the disposition of their duplicate properties: His cabin in the woods that he has leased or lent to the former former hired man and her house in town. In addition, he has to deal with whether to tell her his convoluted story about his granddaughter. And he keeps his investigations into the death under wraps, lying to her as to his purpose for repeated visits to see his old friends on the force in Toronto.

Do you think my descriptions of the subplots overshadow the plot? Then I’m giving you an accurate flavor of the book. The author has at least one other series under his belt, and this particular book, the second in its series, exaggerates the flaws of a series book–too much series business, not enough book business.

Another flaw with the book, I think, might be a bit of city bias: that is, the detective comes up from the city to the back country, so I can too easily see the author doing the same. The up country characters are a bit simple (except for the cops, of course: those guys are multi-layered with their own backstories that also detract from the plot). The detective’s cabin sits on five acres along with a mobile home–and this is a lot of land. That’s city scale. Here in the country, five acres is a yard and a hundred acres is about enough room.

So, hey, maybe this blend of chatty British tea mystery / character drama with police procedural (police are involved) is your bag. It’s not mine. I grabbed the book at the Friends of the Christian County book fair sale a while back to experiment with something new, so give me just a little credit for it. But I probably won’t go back for a second helping.