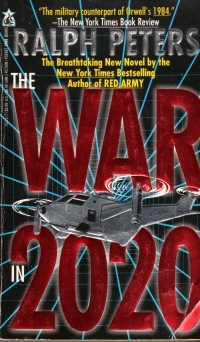 This book reads like someone’s Twilight 2000 campaign. Back in 1992, when I was playing Twilight 2000, the idea of a conventional and nuclear war in Europe was at least not written out of possibility by actual events. Of course, they’re not now, but the timeline developed by Game Developers’ Workshop was proven to be inaccurate (fortunately), so thinking about the Warsaw Pact in 2013 requires a bigger suspension of belief now than then and perhaps a bit of historical perspective to remember what that was like.

Similarly, military thrillers from the early 1990s. In this book, the United States has seen the Soviet Union fall and has cut its military budget after the end of the Cold War (this actually happened, public school kids). BUT the Japan of the 1980s continued rising, and although it was not a military power on its own, it provided very advanced weapons to the Arab Alliance (this has not happened). I guess analysts missed the whole Japanese economic stagnation thing that prevented it from being a real global power (see also Debt of Honor)–however, although it has not come to pass yet, the future remains TBD.

After a worldwide pandemic, partial societal collapse in the United States, a bit of related reconquista, and some hemispheric excursions, a survivor of the first exposure to the Japanese super helicopters (who had to walk out of war-ravaged Africa, hence the early association in my mind with Twilight 2000) is the colonel in charge of a squadron of new super US weapons is staged in Russia (our erstwhile allies in this case) to stop an offensive by the Islamic Republics backed by the Japanese. They have a new weapon–The Scramblers–which disrupt human neural function, kind of a neutron bomb that leaves its victims alive and helpless. But the United States has an ace up its sleeve, too.

So it’s alt history now, and if you can read it that way, you might get something out of it. Peters is not as good as Clancy–there are too many characters just put out there in detail and then cast off–but it’s not a bad read.

It does offer a bit of optimism, though: Peters is a shrewd analyst, but he got these predictions wrong (and, in his defense, in an afterward he says he has played a lot of things up for narrative effect that were not realistic or probable). But the last 25 years have not gone this way. And whatever the shrewd and not-so-shrewd analysts in the papers and on the Internet say about our immediate future, that has yet to happen, too, and far better students of human nature have missed the mark. By that, I mean that Peters does grasp certain elemental truths about man and his relationship to other man–and power structures and tribalism that result. Unlike some who prognosticate and politic with misconceptions in mind. But the future will probably look different from all the things we see published as probable.