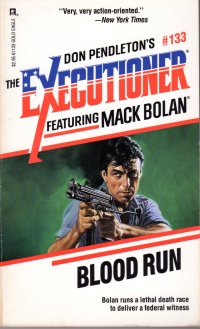 In it, Bolan and his brother Johnny are given the task of taking a high profile witness from Florida to LA to testify against the cocaine king of Colombia who has been arrested on US soil while trying to set up a mega buy. the DEA fears leaks in its forces, so they ask Justice for help, and Brognola knows just the guys. So the Bolans take off cross-country with every hood and gang looking for them, including members of the KKK, a vicious Texas biker gang, and the Arizona mob.

So, yeah, it shares a plot with The Gauntlet and its reboot-before-reboots-were-a-thing 16 Blocks, but it’s executed pretty well. The action flows between the subplots, and this author uses the shifting viewpoint trick to build suspense. The characters didn’t pull any real boners and acted according to their natures.

The text, though, had a couple of sour notes. They talk about driving through Texas as though it was a desert starting at the Louisiana border; even though I’ve only been to Texas once and through Texas a couple times by plane, I know that Deep East Texas is like an extension of Louisiana. That’s the one that stuck with me, but a couple other cast-off lines were not true.

Still, of the, what, seven? Executioner books I’ve read this year, this one might be the best (although War Born was pretty good, too). So I will keep on with the series, probably with a couple more this year as time passes, with the renewed hope that every so often they’ll be actually good and not just the book equivalent of episodic network television.