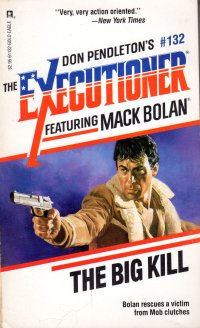 This book is nominally the last Executioner book from the 1980s: its cover date is 12/89. Almost a year into George H.W. Bush’s presidency. Midway through my senior year of college–I was pretty busy with DECA, the writer’s club, and National Honor Society at school, which was compounded by the fact that I didn’t have a car and lived midway down a holler. That’s what I was doing when the cover of this particular paperback was crisp and uncracked.

Reminiscing about where I was when the book came out is better than reflecting on the book itself.

The plot: The murder of a prostitute leads the son of a mafioso, the head of a respectable company but an unwitting participant in illegal activities, to start looking into his business a little more closely. You see, the son loved the young lady once. His investigations lead the mob to put out hits on him and the co-workers who might know too much. But the son retreats, with Bolan’s help, to a lodge in the Rockies where he should be safe–but it looks like the mob was already there waiting for him.

So it looks for the meat of the book like it’s going to be a tower defense plot, as Bolan, the son, the family of the son, and a trusted cop hold off the mafia hit teams, but it’s not that.

It’s a good plot treatment poorly handled. We’ve got some good elements at the high level that lead to a couple of set pieces that make little sense and some howlers. Like when Bolan comes out of an airport in the mountains and looks over the parking lot, and only at the end of his survey is his attention drawn to the car that has no snow on it as, I don’t know, maybe that’s important.

It took me a couple of times to get started on this as I tried to use it as a break from chapters of Bait and Switch, but I’d set it down for a day or so and when I picked it up again, I couldn’t remember what was going on. The jarring jump-cuts between the set pieces (which don’t hang together too well based on continuing the ultimate plot arc) left me wondering where I was.

So not one of the better books in the line, and not a strong note to end the 1980s. And it ends with a bit of a cliff hanger, although I’m not sure that the thread will be picked up in the next book. The hit woman from Dead Line has not yet reappeared. Perhaps it’s just something to throw into the Bolan plot warehouse for later.

But look at that coat he’s wearing on the cover. If you remember the 80s, you’ll remember someone who wore that coat.