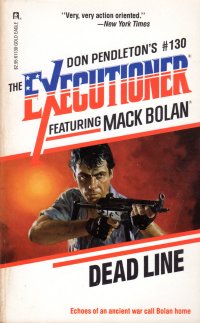 This is the 130th entry in the series, and I’ve apparently read 72 of them so far. So I have started to not so much compare them to literature but to each other. You probably have already seen that, gentle reader, but I guess I’ll need to re-remember and re-write it every time I read one of these (the last was Haitian Hit in April). Or maybe I only write this preface paragraph every once in a while, as I didn’t for the previous book.

At any rate, like Haitian Hit, I picked this book up after a piece of Serious Literature (then it was The Count of Monte Cristo; this time it was Jane Eyre).

The series has shifted from terrorism back to targeting organized crime, so Bolan is called upon to avenge the murder of an undercover narcotics agent who was looking into a smuggling ring using hijacked macguffins. The crime boss takes the wife and daughter of the murdered agent hostage to bargain with Bolan and the government. Officials want to negotiate, but Bolan does not, and so he finds him against elements in the government as well as the criminals.

So, yeah, it’s a lot like other Bolan novels, but it’s a creditable entry in the series. It was a quick enough read. It introduces a high-paid assassin, a tall black woman with shortly cropped hair which probably means that someone just watched A View To A Kill before plotting it. And she gets away at the end, so I’ll probably see her again after my next piece of Classical Literature.