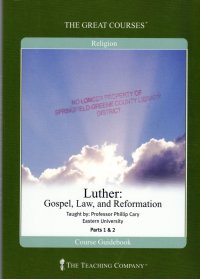 Now this was a good lecture series.

I was certainly underwhelmed with On the Bible as the Root of Western Literature, and I might have thought that On Heaven or Heresy went on a bit long, so I wasn’t really that keen on a new series with religious overtones (although the aforementioned are more literature and history than theology).

But this series of lectures really is all of the above. It’s 24 lectures, longer than the others, and it includes a biography of Luther, the historical context to his writings, the differences in theology that developed between Luther and the Catholic Church (and the Reformists and the Anabaptists and the Baptists), and then it focuses a couple of survey/summary lectures on Luther’s relationship to different things.

The presenter declares himself to be an ecumenical Protestant, which puts a religious listener at ease without remaining a bit tense waiting for a sucker punch or acerbic rejoinder to believers. He presents Luther as a person and a person of his time, with his contradictions and flaws over his career but never in an accusatory fashion.

So I learned a bunch. And I’ve set aside the course guidebook to review. And I might actually listen to this series again as my beautiful wife only heard parts of lectures as we traversed southwestern Missouri on the way to basketball games and archery meets over the last month, so she might want to listen to the whole set.