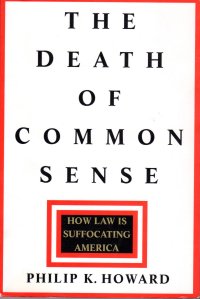 This book is a look at how several factors systematically removed discretion from government and how that made government worse. It’s broken into a couple sections, and basically it boils down to these themes:

I want to remind everyone here that this book is twenty-six years old, so these ruminations precede our current state of affairs which are the poisoned vine from those roots.

The author seems to come from the center-left perspective from that antiquity before Nancy Pelosi and Joe Biden are considered moderate on the left.. I base this mostly on that he quotes left-leaning, albeit reasonable types, more than conservative sources. He doesn’t light into Republicans and seems like he’s trying to rein in some excesses of government power while still saying that its activist do-gooding is good. More of a Daniel Patrick Moynihan type. But nobody listened.

He does quote Walter Olson a couple times, though. I used to cite Overlawyered.com, Olson’s blog, a lot. But that time was closer to this book’s publication than now. How long have I been blogging, anyway? (Seventeen years in March.)

Processes designed for public participation have also taken on a life of their own. In 1991, Donald Trump was persuaded by a coaliton of civic groups (including one I am active in) to adopt a plan for developing a seventy-acre abandoned rail yard he owned on Manhattan’s West Side. Arms locked together, this odd coalition of do-gooders and the Donald entered New York’s three-level zoning approval process. In total, our group attended over one hundred formal meetings, including twelve large public hearings, at which, I could (and did) testify, everyone said basically the same thing over and over. At the end of the process, an intense eighteen months later, the objectors sued. Their main grounds? After thousands of hours of meetings, they complained that the process–specifically, that one draft legal document had been provided six weeks later than certain others. They also said the environmental impact statement, almost two thousand pages long, was not complete. Our coalition won in court. But the project was held up another eighteen months for the litigation.

I would say, “See the meme above about what the future holds,” but according to his Wikipedia entry, Howard has worked with the Trump administration. Also, from his Wikipedia entry, I see that members of the board of his nonprofit included Bill Bradley and George McGovern–along with Alan Simpson and Tom Kean. So he’s a real centrist.

At any rate, I bought this book in 2007, and it has been on the bookshelves in Old Trees and Nogglestead for thirteen years. I’d say I’m looking out for the author’s other works, but I’d probably leave them on the shelves for a long time as well since I get my daily dose of political theory in blogs and don’t generally want to sit down and read them in my recliner.

Still, I agree with this book and didn’t have to throw it once.